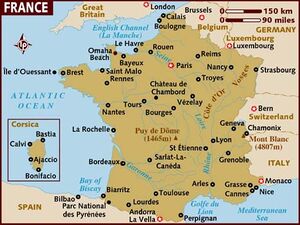 Ardèche (French pronunciation: ​[aʁdɛʃ]; Occitan and Arpitan: Ardecha) is a department in the Auvergne-Rhône-Alpes region of Southeast France. It had a population of 320,379 as of 2013.

It is named after the River Ardèche.

David G. Mahal and Ianis G. Matsoukas[1] conducted a scientific study on Y-STR Haplogroup Diversity in the Jat Population of which brief Conclusion is as under:

The area has been inhabited by humans at least since the Upper Paleolithic, as attested by the famous cave paintings at Chauvet Pont d'Arc. The plateau of the Ardèche river has extensive standing stones (dolmens and menhirs), erected thousands of years ago. The river has the largest canyon in Europe and the caves that dot the cliffs—which go as high as 300 metres (1,000 feet)—are known for signs of prehistoric inhabitants (arrowheads and flint knives are often found).

The Vivarais, as the Ardèche is still called, takes its name and coat-of-arms from Viviers, which was the capital of the Gaulish tribe of Helvii, part of Gallia Narbonensis, after the destruction of their previous capital at Alba-la-Romaine. Saint Andéol, a disciple of Polycarp, is supposed to have evangelized the Vivarais during the reign of Emperor Septimius Severus, and was supposedly martyred in 208. Legend tells of Andéol's burial by Amycia Eucheria Tullia.[2] In 430, Auxonius transferred the see to Viviers as a result of the problems suffered at its previous site in Alba Augusta.

The area of the Vivarais suffered greatly in the 9th century with raids from Magyar and Saracen slavers operating from the coast of Provence resulting in an overall depopulation of the region.

In the early 10th century, economic recovery saw the building of many Romanesque churches in the region including Ailhon, Mercuer, Saint Julien du Serre, Balazuc, Niègles and Rochecolombe. The medieval county of Viviers or Vivarais at this time was administratively a part of the Kingdom of Arles, formed in 933 with the fusion by Rudolph II of Burgundy of the realms of Provence and Burgundy and bequeathed by its last monarch Rudolph III of Burgundy to the Holy Roman Emperor Conrad II in 1032. Locally throughout this period, the Church played an important role. John II (Giovanni of Siena), Cardinal and Bishop of Viviers (1073–1095), accompanied Pope Urban II to the Council of Clermont.

It was later held in fief by the Counts of Toulouse, who lost it to the French crown in 1229. In 1284, with the Cistercian Abbey of Marzan, Philip IV established Villeneuve de Berg, and by the treaty of 10 July 1305 Philip IV of France obliged the bishops of Vivarais to admit the sovereignty of the Kings of France over all their temporal domain. The realm was largely ignored by the Emperors and was finally granted to France as part of the domain of the Dauphin, the future Charles VII of Valois in 1308. During this period, the Maillard family, as Counts of Tournon, were influential in the Ardèche. During the Hundred Years War, the area maintained its loyalty to the French crown, despite frequent attacks from the west.

The department, corresponding to the ancient province of Vivarais, is part of the current region of Auvergne-Rhône-Alpes and is surrounded by the French departments of Drôme, Vaucluse, Gard, Lozère, Haute-Loire, Loire and Isère. It is a land of great contrasts: at the lowest it is at a mere 40 metres of elevation above sea level at the point at which the Ardèche river flows into the Rhône (in the southeast of the department) up to 1,754 metres at Mont Mézenc (centre-west), it is bordered to the east by the length of the Rhône valley for 140 km and to the west by the high plateaus of the Massif Central.