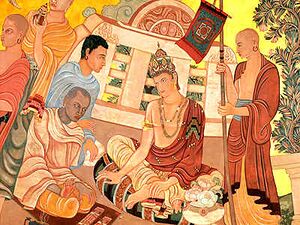 We have little knowledge about the early life of Chandra Gupta, the founder of the Maurya ruling dynasty, which has led to difference of opinion on the issue of his parenthood and early life. Some historians regard him as a prince of the Nanda dynasty while others try to associate him with a poor family. His mother Mura is said to belong to a low caste family. Nevertheless, he held a high rank in Nanda army. Be what it was, the Jaina traditions and Buddhist texts have settled the issue that he was a Kshatriya belonging to a Jat Clan named Maurya.

Mahavansa/Chapter 5 tells that ....The sons of Kalasoka were ten brothers, twenty-two years did they reign in Magadha. Afterwards, the nine Nandas were kings in succession; they too reigned twenty-two years in Magadha. Then did the brahman Canakka (Chanakya) anoint a glorious youth, known by the name Candagutta, as king over all Jambudipa, born of a noble clan, the Moriyas, when, filled with bitter hate, he had slain the ninth (Nanda) Dhanananda.

Arrian[1] writes ....WHOEVER arranges the position of Asia in such a way that it is divided by the Taurus and the Caucasus from the west wind to the east wind, will find that these two very large divisions are made by the Taurus itself, one of which is inclined towards the south and the south wind, and the other towards the north and the north wind. Southern Asia again may be divided into four parts, of which Eratosthenes and Megasthenes make India the largest. The latter author lived with Sibyrtius,’ the viceroy of Arachosia, and says that he frequently visited Sandracotus, king of the Indians.

James Todd writes: [2] Sandrocottus is mentioned by Arrian to be of this line ; and we can have no hesitation, therefore, in giving him a place in the dynasty of Puru, the second son of Yayati, whence the patronymic used by the race now extinct, as was Yadu, the elder brother of Puru. Hence Sandrocottus, if not a Puru himself, is connected with the chain of which the links are Jarasandha (a hero of the Bharat), Ripunjaya, the twenty-third in descent, when a new race, headed by Sanaka and Sheshnag, about six hundred years before Christ, usurped the seat of the lineal descendants of Puru ; in which line of usurpation is Chandragupta, of the tribe Maurya, the Sandrocottus of Alexander, a branch of this Sheshnag, Takshak, or Snake race, a race which, stripped of its allegory, will afford room for subsequent dissertation. The Prasioi of Arrian would be the stock of Puru; Prayag is claimed in the annals yet existing as the cradle of their race. This is the modern Allahabad ; and the Eranaboas must be the Jumna, and the point of junction with the Ganges, where we must place the capital of the Prasioi. [For Sandrokottos or Chandragupta Maurya see Smith, EHI, 42 ff. He certainly did not belong to the ' Snake Race.' The Erannoboas (Skr. Hiranyavaha, ' gold-bearing ') is the river Son. The Prasioi (Skr. Prachyas, dwellers in the east') had their capital at Pataliputra, the modern Patna (McCrindle, Alexander, 365 f.).]

Mauryans being Jats, were denigrated by Brahmans and are termed even Shudras to show their contempt. Even historians like Romila Thapar are confused. She says – :“Chandra Gupta belonged to the Moriya tribe, but his caste was low, the family apparently being Vaishyas. The young Mourya and his supporters were inferior in ardent strength to Nand.”

Many historians like Romila Thapar have doubts about the origin and clan of Chandra Gupta Maurya. Some have termed him even belonging to Shudra caste. The above content from Mahavansa/Chapter 5 clearly tells that Chandra Gupta Maurya was born of a noble clan, the Moriyas. Also the Mahavansha writes name as Chanda Gutta which can be simply written as Chanda Jutta or Chandra Jat.

Infact Maurya was not a caste but it was a gotra of Jats which is still found in Jats. Gupta was his title and not the caste. He was a warrior of Jat caste.

All these are Jat gotras of very old standing. Hence the rule of this dynasty has been given a high place in history of Jats.

There are numerous legends about the Maurya dynasty, as Ashoka of this dynasty was an ardent follower of Buddhism, Brahmin writers have, in the Puranas, called it a Shudra dynasty.

It has, however, been established that Maurya was an old dynasty ruling in the Northern Hills. King Padmananda of the Nanda Dynasty failed in his efforts to conquer this State. Ultimately, his wily minister Shaktar succeeded where Padmananda had failed. As a result of a clever conspiracy the whole ruling family was killed except one pregnant queen who escaped and started living in Magadha as a beggar. One night she delivered a boy and put him in a garbage heap in front of a potter's house. When the potter's wife heard the child's cry, she came out and saw that the boy was handsome as a moon. She took him in her care and named him Gupta Chandra i.e. hidden moon. His mother resolved to rein the Mauryan kingdom one day. She got a job as a maid in the palace so that she could remain in touch with the affairs of the State, She, also kept an eye on her son who displayed signs of greatness.

The Sheshnaga rulers who earlier had their capital at Rajgir, shifted to Patliputra on the confluence of Rivers Ganga and Sone. The ambitions Nanda killed their last ruler and annexed the State. Nanda also conquered the Kaushal kingdom.

At this stage Nanda grew suspicious of his minister Shaktar, son of Viktar. After accusing him of some fictitious offence he got him imprisoned in a dry well.

One day King Nanda happened to laugh. The maid who was attending on him also laughed. The king, considering her action impertinent, sentenced her to death. He however agreed to pardon her if she could tell why he had laughed. At night she went to the dry well and gave food and water to the starving Shaktar. He was grateful and on hearing of her problem, gave her the correct answer. She repeated it to the king the next morning. The king was surprised and asked her how she found the right answer. She told the truth. The king was impressed and ordered Shaktar to be released and reinstated. Shaktar, however, never forgave him and started plotting his destruction.

Vishnu Gupta, well known as Chanakya or Kautilya was educated at the University of Taxila. He was learned but ugly. One day a shoot of spear grass pricked his foot. He said aloud that he would destroy the grass. Shaktar who happened to be passing by told him not to worry, as he would get it destroyed by royal servants. The two became friends after that.

Once Chanakya had gone to a feast given to Brahmins by Nanda on his father's death anniversary. Nanda could not stand Chanakya's ugliness and got him thrown out. Thus Chanakya was harboring a grudge against Nanda. He started looking for some one whom he could train to be capable of destroying Nanda. One day he spotted Chandra Gupta holding a mock-up court of a group of shepherds. He asked him some questions and was impressed by his intelligent answers. Chanakya took Chandra Gupta in his care and trained him so well that with the connivance of Shaktar he became Nanda's C-in-C. He became very popular. Unfortunately the conspiracy leaked out and Chandra Gupta and Chanakya were banished from the country. They migrated to Punjab. At the time of Alexander's invasion they managed to get a number of small states to get together and marshaled a sizeable army under the command of Chandra Gupta. He defeated Alexander's General Seleucus who gave him his daughter Helen in marriage and retired to Greece. Chandra Gupta became the ruler of most of the Punjab with Chanakya as his Prime Minister. Chandra Gupta conquered Magadha thus fulfilling Chanakya's long cherished aim of destroying Nanda.

Extent of His Empire

If we could place reliance on the statement of Chankya, it is found that in his administrative departments, there existed one post of Devatadhyaksha i.e. Superintendent of Religious Institutions to look after all temples of towns and villages of his realms. He was incharge of temple properties and could set up new Siva-Linga in old temples or set up new temples. [V.2].

If it is true then Chandragupta Maurya placed faith in Siva before his conversion to Jainism as claimed by the Jain Traditions contained in Prisistaparavana.

Back to The Rulers Back to Jat Kingdoms in Ancient India