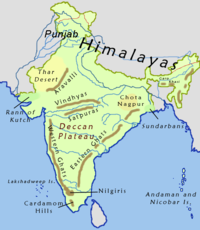 The Himalayas, or Himalaya, (हिमालय) are a mountain range in Asia, separating the plains of the Indian subcontinent from the Tibetan Plateau.

The Himalayan range has the Earth's highest peaks, including the highest, Mount Everest. The Himalayas include over a hundred mountains exceeding 7,200 metres (23,600 ft) in elevation.

Himalaya (हिमालय) is mentioned by Panini in Ashtadhyayi. [1]

The Himalayas are spread across four countries: Bhutan, India, Nepal and China, and, a small range in Pakistan (though it is in Pak occupied Kashmir, which is part of India and is forcibly occupied by Pakistan). The Himalayan range is bordered on the northwest by the Karakoram and Hindu-Kush ranges, on the north by the Tibetan Plateau, and on the south by the Indo-Gangetic Plain.

Some of the world's major rivers, the Indus, the Ganges, and the Tsangpo-Brahmaputra, rise in the Himalayas, and their combined drainage basin is home to roughly 600 million people. The Himalayas have profoundly shaped the cultures of South Asia; many Himalayan peaks are sacred in Hinduism and Buddhism.