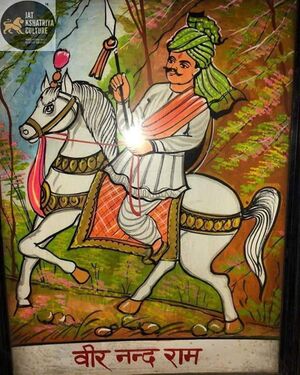 After Shahjahan, Makhan Singh's grandson Nand Ram again organized the Jat power and became strong by merging Porcha Raja of Dariyapur with him. When Aurangzeb became the ruler of Delhi he could not ignore Nand Ram and awarded him the title of Faujdar and handed over Tochhigarh tahsil to him. Nand Ram ruled tactfully and bravely for 40 years and died in 1695. [1]

Ancestry - He is also known as 'Fauzdar' Nandram Thenua/Baba Nandaram/Nanda Jat. Nandram was 4th in descent(some sources say 10th) from Makhan Singh the head of Thenuas under whose leadership Thenua Jats came from Rajasthan to Braj and established the Tappa of Jawar (The Thenua principality) in Jalesar Pargana. Nandram succeeded his father Kanwar Sen Thenua in 1645 AD during the reign of Emperor Shahjahan.

Decided to oppose Mughals- Nandram inspired by the father and son duo Ruria and Buria Singh of Sinsini and other Jat revolutionaries of that time decided to oppose Mughals. He stopped giving tax to Mughals and openly challenged Mughal rule. He started attacking Mughal possesions. The Raja of Daryapur also supported him.

Victory of Tocchigarh- Nandram after defeating Sadullah Khan and Mughal in numerous struggles moved towards Tocchigarh. Tocchigarh was a big market and Mughal soldiers used to constantly rest there. He won the Fort of Tocchigarh and made it his capital. He consolidated his power expanded his borders. Mughals were not able to subjugate him during Shahjahan's reign.

Fauzdari of Koil- As soon as Aurangjeb came to power he tried to bring Nandram to his favour. He accepted Nandram's rights over all the conquered territories. He called Nandram to Delhi where is gave Nandram robe of honour, ugged him and gave him the title of 'Fauzdar' and the additional fauzdari of Sarkar of Koil which he accepted.

The Revolt of 1669- There were many important Sardars of Nandram. Two of his loyal Sardars were the brothers Madu Singh Haga and Uday Singh Haga (they were hereditary Castellan of Ghirsa and estate holders of Mauza of same name). Madhu Singh was killed in a battle with the Mughal in 1651 and Madu Singh's son Sindhuraj was killed next year. After Nandram accepted the new titles, post and peace was made with Mughals. Uday Singh with rest of the family of Madu Singh retired to the Fort of Ghirsa. Madu Singh's surviving son Gokula Singh became Zamindar of Tilpat. Nandram encouraged Gokula Singh to revolt against Mughals. Gokula Singh ended Mughal rule in the districts of Mathura, Sadabad and Agra. Gokula Singh killed Fauzdar Abul Nabi and defeated 3 other Governors. The Emperor Auranjeb himself marched against Gokula Singh and captured him in the Battle of Tilpat. Auranjeb brutally killed Gokula at Agra Kotwali and ordered destruction of all strong Jat Chiefs and strongholds.

One of the stronghold Sinsini was attacked and Mughals were defeated. Raja Ram Singh Sinsinwar rose into prominence after killing Lal Bheg of Auw. Raja Ram Sinsinwar and his follower ended Mughal rule in Agra Subah but he was killed in Battle of Bijal. Aurajeb executed Ramki Chahar in a brutal fashion at Agra and employed his Grandson Bidar Bhakht, with other officials for general massacre of Jat (extermination of Jat-e-Bagjat) hence started the Jat Mughal War. Nandram Thenua also became hostile towards Mughal and he was to play a greater role in the Jat Mughal War.

Jat-Mughal War and Nadram's role- In the Jat-Mughal war when all the Jat cantons felled and leaders crossed Chambals. Mughals moved against Nandram the last of the Jat Chieftain. They attacked the Fort of Jawar. Nandram killed Hari Singh the Mastermind and most ablest of Mughal general in the war turning the tide of victory towards Jats. However he was himself killed in the next Siege. He died but Jats won the War and Nandram played a crucial role.

After his death- Nandram's 18 sons carved out independent principalities. The Rajas of Mursan, Rajas of Hathras, Thakur of Tocchigarh, Thakur of Hamirpur, Thakur of Bahramgarhi, Thakur of Jatoi and many other are all descendants of Nandram.

Dr Girish Chandra Dwivedi[2] writes.... Meanwhile, the troubles had been brewing up in the trans-Yamun paraganas of Mahaban Jalesar and Sadabad. Nand Ram Jat had built a strong fort at Jawara (2 miles to north-east of Mursan) and surrounded it with a network of small garhis, Kihrari (6 miles to the north of Mahaban), Jagsana (2 miles to the north of Kihrari) etc. Fraternizing with the Nohbar Jats of Noh (6 miles to the north-east of Jalesar) he plundered the above parganas and created lawlessness there. The emperor ordered Bishan Singh and Hari Singh to crush Nanda and other Jat miscreants. The Raja, however, submitted that in the event of Itiqad Khan retaining the faujdari of Mahaban the responsibility of the re-bails rested with the Khan and not with him. but these procrastinations proved futile. The Kachhawaha troops crossed the Yamuna and capturing Anore garhi Kihara and other garhis laid siege to Jawara (1st week of March 1695) Hari Singh , was, however, killed (5th April) while leading an assault. Thereupon Bishan Singh assumed command and through the efforts of Gaj Singh, Jawara was captured (2nd week of May) but Nanda's sons escaped. 74. VIII