Rao Burdakdeo (r.975 AD-d.1000 AD) (राव बुरड़कदेव) was a Burdak Jat ruler of Dadrewa in Churu district in Rajasthan. Rao Burdak Dev went to Lahore to help Raja Jai Pal during war against Mahmud Ghazni. He died in war in 1057 (1000 AD) and his wife Tejal of gotra Shekwal became sati in Dadrewa . Her chhatri was built on the site of Dadrewa pond in samvat 1058 (1001 AD). As per bards he is consodered as originator of the Burdak Gotra. Here it is to be mentioned that Burdak clan existed earlier also but to remember the contribution of Rao Burdakdeo in history, Bards have recorded so.

History of Burdak clan is recorded and maintained by Bard (traditional record keeper) Rao Bhawani Singh (Mob:09785459386) of village Maheshwas, tahsil Phulera, district Jaipur, Rajasthan. As per his records Burdak clan is a branch of Chauhan dynasty. Here is produced below the historical account based on bards of Burdak clan.

In the Punjab, Jayapala became the paramount ruler. He made Bathinda, his second capital for better administration of the neighbouring region. To the east of his realm, the Toramana dynasty ruled over Haryana and Delhi. The Ghalibids governed Multan and the territory up to Lahore and Ramiyan. Jayapala sent an expedition under his son Anandapala who defeated Bharata and advanced on Lahore. Bharata paid him a large sum of money was allowed to rule Lahore as a feudatory. But later Bharata was dethroned by his son Hardrat. Anandapala again marched with an army to punish him and annexed Lahore to Sahi dominions in 999 AD. Jayapala’s authority now extended from Langhman (Jallalabad) to the river Chenab. He now ranked as the greatest king of India. The Arabs described him as the ruler of Hindustan.

From the time of Jayapala onwards the Muslim rulers of Ghaznavi exerted a continuous pressure on the Hindu Sahis. Alpatgin, a Turkish Muslim governor of Khorasan, proclaimed himself an independent ruler of a small mountain principality named Ghazni. He ruled over this petty kingdom for eight years and died in 963 A.D. Then followed a period of confusion of fourteen years. Ultimately in 974 A.D., Sabuktgin, a slave and son-in-law of Alpatgin, seized the throne of Ghazni and founded the Yamini dynasty of Ghazni. After consolidating his newly acquired kingdom, Sabuktgin turned his attention towards India.

Jayapala naturally became apprehensive about the security of the North-Western frontier. The two neighbouring rulers soon came into conflict. Jayapala determined to push back the Turks by a powerful offensive. Jayapala had made an alliance with the Muslim rulers of Multan. Hence Sabuktgin’s first task was to detach them from the Hindu Sahis. Emboldened by this diplomatic success, he invaded and annexed some frontier outposts of Jayapala’s territories. Jayapala retaliated by making an advanced attack on the Turkish territory with a large army. A furious battle was fought on the frontier of the two kingdoms which lasted for many days and both sides suffered heavy casualties. When its issues were hanging in the balance, a dreadful snow storm caused severe losses to the Sahis. Being disheartened, Jayapala is said to have made peace with Sabuktgin promising to pay large sums or money, some cities and elephants. But the relations between the two rulers remained constrained.

Jayapala refused to pay the money and resumed preparations of war. He also received help from prominent Hindu states like those of Delhi, Ajmer and Kanauj. In 991 A.D. Jayapala once more at the head of a vast army marched on Ghazni and met the Turks somewhere near Laghman.

Sabuktgin resorted to a sort of guerilla warfare. He divided his army into contingents of 500 each to attack the Sahi forces one after another with utmost violence in successive waves. The armies of the plains were not used to this type of warfare in mountains. He this turned out the Hindu armies who had been fighting without any respite. They suffered severe losses and were driven back to the Indus. In the course of these campaigns, Jayapala lost his territories west of the Indus. In about 988 A.D. Sabuktgin occupied Peshawar where he posted an army of 10,000 Turks. Sabuktgin died in 988 AD. He was succeeded by his son Sultan Mahmud who came to the throne of Ghazni after a brief contest with his brother Ismail in 988 AD.

Mahmud led his first attack on the Sahi territories in 1000 A.D and plundered some frontier regions of Jayapala. Jayapala planned a counter-attack and tried to check Mahmud’s advance near Peshawar. In the battle that was resumed in November 1001, Jayapala put up a very stiff resistance, but was once more defeated.

Jayapala and fifteen of his relatives were made captives. Immense booty passed into the hands of the Turks. On payment of a heavy ransom by his son Anandapala, Jayapala and his relatives were set free. Jayapala was a brave and courageous ruler. He was so deeply stung by his successive defeats that in 1002 AD. He handed over the cares of his kingdom to his son, Anandapala. With the courageous despair of his race, Jayapala refused to survive the disgrace and burnt himself upon a funeral pyre. Thus ended the eventful life of this gallant Sahi monarch.

On the Gill Clan, the view is expressed that Jayapala, Hindu Shahi Raja, is related to Gillpal, ancestor of the Gill Clans. The Hindu Shahi’s had two capitals, one near Lahore and the other in Bathinda. Jayapala is said to be the last supreme ruler of the Gill Clans. Batthinda relatives probably were subordinates of Jayapala. After their expulsion, Gillpal left Batthinda with his families and moved towards Rajiana. His descendants were expelled from Rajiana by the Brar Clans and they moved towards Moga, Ferozepore and Amritsar Districts. [1] 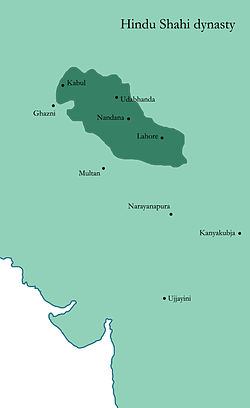 It is a matter of research to explore Samudra Pal's death in Waihind (Vaihind, Udabhanda, Udabhandapura). We find that Anandapala was the Indian ruler at the time of Mahmud Gazanavi's sixth invasion of India during 1008-1009 AD in the Vaihind region near Peshawar.[2]

The sixth expedition of Mahmud was led against Anandpal in 1008 AD. He organized a confederacy against the Muslims in which the great Hindu Rajas of Ujjain, Gwalior, Kalinjar, Kannauj, Delhi and Ajmer had joined. Mahmud had never met such a vast army organized by the Hindu confederates. The Khokars from Punjab also joined Hindu army in the struggle against the Muslims. It was a challenge to Mahmud. He met the huge Hindu army near Waihind. The bear-footed and bear-headed Khokars fought very bravely against the Muslims. It was a critical moment for the Muslims. but fortunately the elephant of Anandpal got frightened and fled away from the battle-field. This caused a great confusion and panic among the Hindu soldiers who also ran away from the battle-field. Mahmud won victory.

Waihind is near modern Attock. Gandhāra (गन्धार) is also known as Waihind (ویهیند) in Persian. It was a famous town of ancient India. It is mentioned in the connection with Gazanavi conquests. Mahmud conquered it in 393 AH after conquest of Peshawar. It is the capital of Kandahar and it lies in the Sindh valley. V A Smith in the Early History of India locates the capital named Ohind near Sind River and writes that after the Muslim conquest of Kabul in 256 AH the capital shifted to Ohind which was situated near Sind and was the capital of Hindu Ruling Dynasty. Towns under capital vaihind were Wadhan' Batir, Nawj Lawar' Saman Kuj etc. In the territory of Waihind there was sizable population of Muslims but Hindus were in majority. Both populations had their own kings. [3]