Chaudhari Chandgi Ram Kadwasra (चौधरी चन्दगी राम कड़वासरा) was a freedom fighter in Rajasthan. He was born in the family of a Kadwasra Jats of village Neshal, tahsil Rajgarh, district Churu in Rajasthan. He played an important role in Kangar Ratangarh movement against Jagirdars. 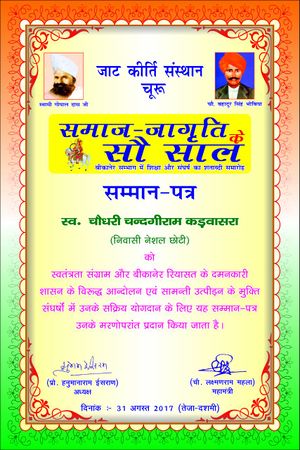 Chaudhari Rupram Maan and Swami Chetnanand started the education program of Jat farmers in rural areas of Ratangarh tehsil by opening private schools. They appointed Swami Nityanand and Chaudhari Chandgi Ram for this purpose. Swami Chetnanand was born in the family of a Dhaka Jat farmer and could feel the effect of oppression by Jagirdars. These people remained under ground and collected money to start the private education of Jat boys. Chaudhari Budh Ram Katewa of Bharatia ki Dhani, Ratangarh, Chaudhari Budh Ram Dudi village Sitsar and Chaudhari Surta Ram Sewda, Ratangarh helped a lot in this campaign. Chaudhari Surta Ram Sewda gave his own land for starting a school and Chaudhari Budh Ram Dudi got made a shade on this land to start a school.

At that time there were about 40-50 Jat boys getting education in Ratangarh town who were mainly from Sihag, Dudi, and Tetarwal Jats of Ratangarh town and rest were from nearby villages like Sangasar, Loonchh, Loha, Chhabri, Kadia, Tidiyasar, Thathawata etc. Most of these boys were from poor families and could not afford education on their own. The only means of funding the private education was through collection of contribution (chanda) or subscription from the farmers. Jats of Ratangarh and Churu either could not afford or did not give subscription out of fear of the Jagirdars. But the Jats of Ganganagar district were well off and they were not much effected by Jagirdars. They gave handsome amounts for education.