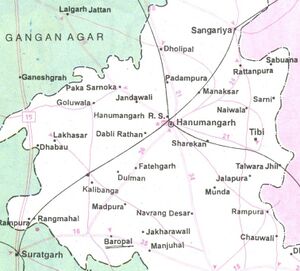 Location of Dhaban in Hanumangarh district

Dhaban (ढाबां) is one of the biggest Village in Sangaria Tehsil of Hanumangarh district in the Indian state of Rajasthan.

It is Situated on Border of Punjab and Haryana.

It is interesting to know that this village has people of almost every gotra we come across in that area.

Dhaban is the most famous and old village of erstwhile Bikaner State. The word Dhab means - 'The Source of water'. Dhaban is plural of word Dhab, means many water sources. So fresh water was there and Dulla Khan, a muslim cattle herder from which Dhaban was boughtd by Jatt Sikh families migrated from British Punjab. Dulla Khan sold this camp (Present Village area of Dhaban) and revenue area Banjad Zameen about 52000 Beeghas in Rs.- five only in 1884 Vikarmi Samvat out of which Rs.-four were paid by Ch. Fina Singh Sahu and Rs.- one paid by Ch. Gharsi Jakhad ( According to old records, Muawaz Khana Suratgarh)

Chief Jatt Sikh Families (Khalsa Sardars) first came in Dhaban and bought the area were Gharsi Jakhad and Fauja Singh Sahu. Later in due course of time their relatives Beniwal Family, Godara, Karwasra, Bairad, Thorijat, Saharan and many other clans of Jats and Jatt Sikhs migrated from British Punjab and Rajputana. So the Culture of village is somewhat a hybrid variety of Punjabi and Rajasthani Culture and Language is called Beradi Zabaan because people speaks mixture of Punjabi and Bagadi (North Marwadi)

Total land area of Thikana-Dhaban was 52000 Beeghas which was divided into three parts (Zagirs) as under:

In Beginning these villages were divided according to Jat or Jatt Sub castes as follows :

2. Bhagatpura was given to Beniwal Family (Sanwat Singh) but Beniwals did not migrate from Dhaban and later on it was given to Sikh families from Bhagta (Bhatinda,Punjab).

3. Phool Desar was given to Sahu family but till now no one lives there due to the reason that Fina Sahu's family was small with only son Megha Singh Sahu.

Land area of whole village Dhaban (26,000 Beeghas) was divided in five patties each one headed by a Lumberdar (Alam-Ber-Dar) an Urdu word for village headman which means local care taker or head of local Govt., Zamindar or Zagirdar. This post was inherited from father to son (traditional) and was at the last ring of chain of Indian feudal system.

Rest two Patties were Sahu - Ch. Fina Singh whose family migrated from Nandgarh village, Bhatinda (Punjab) and Beniwal - Ch. Sanvat Singh. Each Lumberdar held the control of 5,000 Beeghas of Land out of which 1,000 Beeghas in direct control of him and his peasants (Labours) and 4,000 Beeghas divided among peasant farmer (Muzaras) from whom the headman (Lumberdar) collected land revenue and used to deposit in Bhatner Tehseel (now called Hanumangarh Town) of Bikaner state. Suratgarh was Nizamat (District) of this area in state time. Being the area of Khalsa Zagirs, on the every group of Five Lumberdars or five villages one Zaildar was appointed as the member of District Board (Nizamat) Suratgarh. As natural Jakhad family was in majority, so fore fathers of Ch. Krishan Kumar Jakhad were on this permanent post of Zamindari System of British India as Bikaner State was under indirect control of Britishers.

This all above Zamindari System Came to an end in 1962 AD when Govt. of Rajasthan enforced Land Settlement System and Rules 1955 act. Last structure or team of this Zagirdari System was as-

In April 1962 Total charge of Land Revenue System was completely handed over to Patwaris (Revenue) and Irrigation System control under Patwaris (irrigation) at village level.

Small powers like 2 months Imprisonment and small penalties were court powers of Lumberdars because there was a Police Station (Kotwali) and Tax Post (Zaqaat Thana) were in village since Bikaner State times. Both were transferred to Sangaria Mandi after Independence.

In modern era, times changed and with the keen interest of Maharaja Ganga Singh Ji (Bikaner Durbar) the Canal System was Developed. So as a result of which Gang Canal (Bikaner Canal) was built in 1927 in Sri Ganganagar area and later surveyed in 1940-45 from which two Canals from the tail of Sirhind Feeder Canal (TSF Head) are as- Sadul Branch and Karni Singh Branch named after names of son and grandson of Maharaja Ganga Singh Ji because Maharaja paied estimated Expense to the Govt. of British India and finally to United Rajputana in 1946. These Canals started in 1952 and water came in them in year- 1958.

The main Head or Zero Head is situated 5kms. East of Dhaban in area of Haryana State (Previously Punjab before 1966). Both Canals enter in Rajasthan in the area of Dhaban Village so irrigated Land area of Dhaban is on BGP, SNG, RTP, NTW, DNG, HRP and STP minor distributeries from different Head works of Bhakra Irrigation System.

The area of village is Chiefly Agro-based and Main crops are- American Cotton (NARMA), Indian Cotton (KAPAAS), Gwar, Wheat, Mustard, Barley, Millets, Rice (Small Area) Dals –Moth, Moong and Arhar. Tube wells (Tractor driven and Electric Motor driven) are also there. Dhaban was connected to road (Abohar-Sangaria) in 1966 and water works System in 1972. The above work was a result of continuous efforts Ch. Banwarilal Sahu S/O CH. Megha Singh Lumberdar. He was in touch of political leaders in 1960s because of family relatives with Minister Ch. Ram Chandra Kadwasra (Deengarh) and Minister Ch. Kumbha Ram Arya (Fefana). Village was electrified in year 1978. There are twelve Government School in Dhaban from Primary to Sr. Sec. level. Tele communication connection is from Sangaria X-change in 1988.

Many people of village in different fields like Govt. Job, Business, Agro Business, Public and Private Services. At present DHABAN is not only among main Villages of North Rajasthan but also of North India.

Gallery of Images from Dhaban