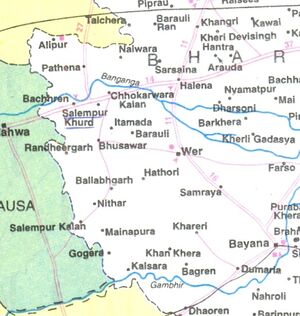 Location of Halena in Bharatpur District

Badan Singh’s second imprisonment within a short time and the maltreatment at the hands of Muhkam Singh ultimately strengthened his cause. Fransoo adds that as many as 22 prominent sardars (Said [2] to be Raja Ram’s son, Fateh Singh of Ajan , Anup Singh of Arig, Ati Ram’s son, Shardul Singh of Halena , Gujars of Sihi and Helak , Purohit Kalu Ram and Lalji of Barsana and others), who loved Badan Singh for his “ good behaviour” appealed to Muhkam Singh to release his cousin but he refused . [3],