For Gotra of this name see - Khair 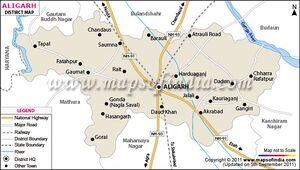 Location of Khair in Aligarh district

Khair (खैर) is a town and tahsil in Aligarh district in Uttar Pradesh.

In late 17th century [during the Mughal rule], Hari Singh had been ordered by the Mughal Emperor to march against the powerful Jat chief, Amar Singh, who owned two forts namely Khair (16 miles north-west of Aligarh) and Ranth (8 miles east of Khair). After a prolonged fight, Hari Singh succeeded in capturing these forts and expelling Amar Singh. The latter sought shelter with another powerful Jat leader, Nanda Jat, who was supreme in a tract stretching form Hathras and Mursan to Mahaban. Amar Singh's two prominent sardars, Birju and Taula, who had gone into hiding in Arnia near Khurja, were arrested later on.59 [1]

Back to Uttar Pradesh