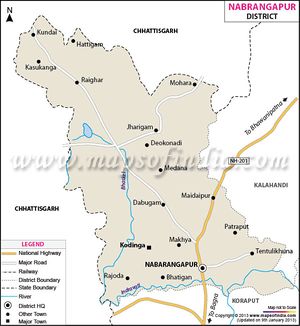 Nabarangpur, also known as Nabarangapur and Nawarangpur is a city and district of Odisha, India. The city of Nabarangpur is the district headquarters. Most of its population is tribal, and most of the land is forested.

Situated in the southwest corner of Odisha, it borders Koraput District. Nabarangpur district is situated at 19.14’ latitude and 82.32’ longitude at an average elevation of 572 m.

Its boundary stretches in the north to Kalahandi District, west to Jagdalpur District in Chhattisgarh, east to Kalahandi and Rayagada District and south to Koraput District. The river Indravati forms the border between Nabarangpur and Koraput districts.

Koraput belonged to the Atavikas, a feudatory of the powerful Kalinga Empire (Ancient Odisha) who valiantly fought the Kalinga War in the 3rd century BCE. Kalinga regained its former glory during the Mahameghabahan Dynasty in the first century BCE. The third king of this dynasty Kharavela made the Kalinga empire and the Atavika land was very strong under his rule.

The successive dynasties – the Satavahanas (2nd century CE), Ikshvakus (3rd century CE) had headquarters at Pushkari, near the modern town of Umerkote. The Kesaribeda excavations bear testimony to the rule of King Bhabadatta Varma and King Arathapati. The inscriptions of Podagarh refer to king Skandavarma.

The overlord Nala kings are traced to the kings who ruled from Gwalior in Madhya Pradesh. Their rapid growth landed them in the Odia regions of Bastar and Koraput. Around the 10th century CE a Nala king Bhimesen was ruling over a region now located in Koraput and Ganjam District.

The Koraput area including present-day Narabangpur District was a small principality of Tri Kalinga under the Ganga era of the 5th century CE. The patches of Utkala, Kalinga and Kosala were brought under the control of the Ganga kings of Odisha. This dynasty became prominent during the 11th century CE with the rise of Somanakshi. Their suzerainty extended from the modern Sambalpur, Sonepur to the Bastar and Koraput regions and they enjoyed control until the beginning of the 14th century CE.

The Matsya family ruling over the Oddadi region of modern Jeypore dominated the next generation. The best known kings included Bhanudeva and Narasingha Dev, as is known from the Odia inscription of Simhachalam in Visakhapatnam district of Andhra Pradesh.

The next dynasty belonged to the Sailavansis, who ruled over Vindhya during the 14th century CE. The earliest king Ganga Raju was ruling over Nandapur, a former capital of the Maharaja of Jeypore. Nandapur is famous for the throne of 32 steps erected in the line of king Vikramaditya of Ujjain. Jainism and Shaktism grew side by side in the kingdom of Nandapur.

The last king of Sailavansa, Pratap Ganga Raju was succeeded by Vinayak Dev of Surya Vansa which lasted until the time of the British Empire. Vinayak Dev was said to be married to the daughter of the last ruler of Silavansi Paratap Ganga Raju. He and his six succeeding generation of kings had only one son each and on advice from astrologers the headquarters of the kingdom was switched from Nandapur to Jeypore.

During the Anglo-French conflict, Vikram Dev I (1758–1781 CE) was successful in driving out the French from Malkangiri area and the Marathas from the Umerkote belt. They were succeeded by the brave Odia king Ramachandra Dev II (1781–1825) while his other two sons Jagannath and Narasingh Dev were placed in charge of Nabarangpur and Gudari regions. Jagannath Dev’s son Arjun Dev and Narasingha Dev’s son Chaitanya Dev were issueless. Hence, Nabarangpur and Gudari were remerged to Jeypore kingdom.

During the 20th century Ramachandra Dev IV (1920–31) was an honourable lieutenant in World War I. He was issueless and was succeeded by a benevolent, aged, scholar king Vikram Dev IV, the son of Krishna Chandra Dev. During this period the Boundary Commission headed by Sir O’Donnel was entrusted with the task of writing the different Oriya speaking tracts. The Commission went round Jeypore, Paralakhumendi, Ganjam, and Visakhapatnam before finalizing its decision. The state of Orissa was formed on 1 April 1936 with Koraput as one of the six districts. In 1951 Vikram Dev IV died at 82 and the Estate Abolition Act was passed the next year. The Estate of Jeypore was taken over by the Government of Odisha.

The Telen River which rises in the north of Nabarangpur District forms its geographical boundary with Kalahandi District and finally unites with a bigger Mahanadi River in Sonepur town. It is not perennial and dries up during the summer. The important river Indravati flows through Nabarangpur District and beyond until it mergers with the mighty Godavari in Telangana. It runs through a total distance of about 530 km of which the Nabarangpur and Koraput district sections make up about 130 km. At Nabarangpur town the old girder bridge has been replaced by a new span. Before reaching Jagadalpur town in Chhattisgarh state, it is joined by another river Bhaskal that drains the north of Nabarangpur.