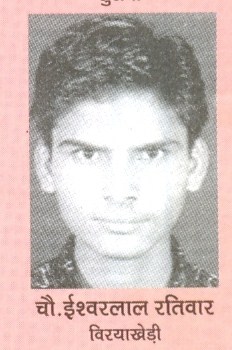 Rajatarangini[1] mentions the victory of Kashmira king Lalitaditya over Konkana kingdom. ....Karnāta submitted on his approach. A beautiful Karnāti lady named Ratti who ruled supreme in the south, her territories extending

[p.69]: as far as the Vindhya hills, also submitted to him. The army then rested on the banks of the Kaveri beneath the palm trees, drinking the water of coconuts. Thence he marched to Chandanadri. And then the king crossed the sea passing from one Island to another ; and thence marched towards the west, the sea singing the songs of his victory. He then attacked the seven Kramuka and the seven Kongkana which suffered much thereby. His army was anxious to enter Dvaraka situated on the Western Sea. The army then crossed the Vindhya hills and entered Avanti where there was an image of Shiva named Mahakala.

Dr Naval Viyogi in his book "Nagas: the Ancient Rulers of India" [2] has provided a list of some important Gotras of Tak kshatriyas and explained their history. The list includes Jat as well Rati.

Dr Naval Viyogi also writes that there was a Naga family of Ratta people in the south. Ratta was naga king of Mahinsak-Ratta. C.V. Vaidya [3] has traced out the relation of queen of Ratta family with the region of eastern valley. Kalhan has described her, as the queen of Ratta family of Karnat country, which has been equated with Karnataka and the region has been called Mahinsaka in pali literature and Mahishaka in sanskrit. The rule of Ratta in karnataka was in in 7-8th century. [4]

Dr Naval Viyogi quotes the opinion of N K Dutta according to whom Aratta were round headed Iranians, and were known as Rattika or Ratta, whose mention has been made in the inscription of Ashoka. This Rattika or Ratta is a variation of Iranian word 'Rathaestha'. Hulus has equated Ratta with the Arattioi of Periplus and Aratta of Punjab. [5]

There is evidence from Shankhapal jataka that there was a naga king of Ratta or Aratta family who were Karaskaras. [6]

Copper-plates issued by the Yadavas of Devagiri mention the Nāgas as its oldest known rulers.[7] Rashtrakutas, Satavahanas, Vakatakas, Chalukyas, Chutus, Vishnukundina have ruled Kuntala, as suggested by stone inscriptions and copperplates.[8] Kuntala is identified with Raṭṭapāḍi which is translated as settlements of the Raṭṭas.[9] Copper-plates of Pulakeshin II speak of him as the king of three Mahārāṣṭrakas, Kuntala being one of the Maharashtrakas (other two being Vidarbha, and Konkan region of 99,000 villages.