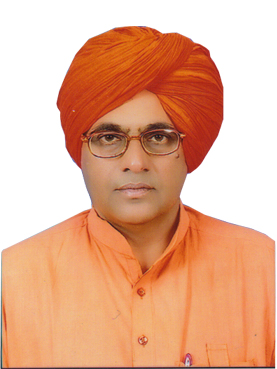 Swami Sumedhanand Saraswati (स्वामी सुमेधानन्द सरस्वती) is a reputed Saint at Vedic Ashram in village Piprali in Rajasthan. He is Member of Parliament (2014) from Sikar. He is Member of Lok Sabha from Parliamentary Constituency Sikar (Rajasthan ). He won election as Bharatiya Janata Party (BJP) candidate in 2014 and 2019.

Has religious bent of mind since childhood, left home in 1972 to study Sanskrit, while studying Sanskrit, undertook teaching also for eight years, took `Diksha` from Swami Sarvanandji in 1984 and became `Sanyasi`; while doing social work, got associated with BJP in 1989; Participated in movements like "Save Cow" (Gauraksha) and "Prohibition of liquor" etc.; played active role in J.P. Movement also.