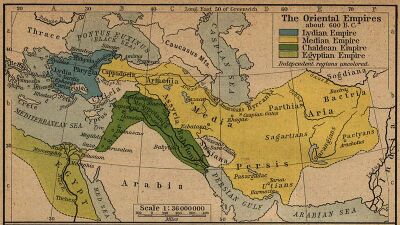 Ariana was a general geographical term used by some Greek and Roman authors of the ancient period for a district of wide extent between Central Asia[1] and the Indus River,[2] comprehending the eastern provinces of the Achaemenid Empire that covered entire modern-day Afghanistan, east and southeast of Iran, Tajikistan, Turkmenistan and the then Persian ruled northwestern Pakistan.[3]

Areia occupied what is now the east part of Khorasan, and the west and north-west of Afghanistan.[5] 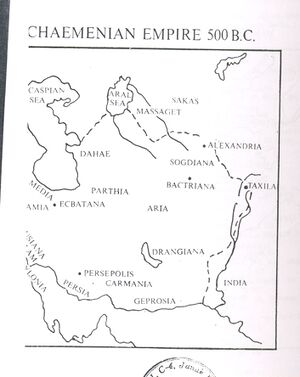 The Greek term Arianē (Latin: Ariana) is based upon Old Iranian Āryana- (Avestan: Airiiana-, esp. in Airiianəm vaēǰō, the name of the Aryans’ mother country, whose localization is disputed).[7] The modern name Iran represents the ancient name Ariana, - a word itself of Avestan origin.;[8] a view which is borne out by the traditions of the country preserved by the Muslim writers of the ninth and tenth centuries.

The names Ariana and Aria, and many other ancient titles of which Aria is a component element, are connected with the Sanskrit term Arya-, the Avestan term Airya-, and the Old Persian term Ariya- , a self designation of the peoples of Ancient India and Ancient Iran,[9] meaning "noble", "excellent" and "honourable".[10]

At various times, the region was governed by the

The tribes by whom Ariana was inhabited, as enumerated by Strabo were:[12]

Rajatarangini[13] tells that ...[p.141]:The first act of this new king Yashaskara was to order his door-keepers to send away the Brahmanas who had selected him king, as he did not like to he disobeyed by any one.

[p.146]:This truthful king killed some foot soldiers though they laid down their arms before the shrine of Shriraneshvara. He was so glad on the death of his older brother that many wise men who were near him thought that he had caused his brother's death by magic. He made a courtesan Lalla, supreme over all his chaste wives and subjected himself to her control.

[p.147]: The king thought that it was owing to some virtue committed in his previous birth that he had obtained the kingdom in the present, although not born in the royal family. Ambitious of obtaining kingdoms in his future lives, he bestowed his wealth on Brahmanas. He raised a school in the place of his ancestral worship, for the education of the children of Aryya countries, and he gave chamara, umbrella and treasures to the Principal of that school. On the banks of the Vitasta he bestowed fifty-five villages to the Brahmanas.

At last the king was attacked with a bowel complaint. He discarded his son Sanggramadeva as not being born of him, and crowned Varnata son of Ramadeva, and grandson of his uncle, and placed him under the care of the ministers, Ekanggas, and petty kings.

Arrian[14] writes.... Having settled these affairs, he marched to Zadracarta, the largest city of Hyrcania, where also was the seat of the Hyrcanian government. Tarrying here fifteen days, he offered sacrifice to the gods according to his custom, and celebrated a gymnastic contest, after which he began his march towards Parthia; thence to the confines of Areia[1] and to Susia, a city in that province, where Satibarzanes, the viceroy of the Areians, came to meet him. To this man he restored his viceregal dignity, and with him sent Anaxippus, one of the Companions, to whom he gave forty horse-lancers so that he might be able to station them as guards of the localities, in order that the Areians might not be injured by the army in its march through their land. At this time came to him some Persians, who informed him that Bessus had assumed the erect tiara[2] and was wearing the Persian dress,[3] calling himself Artaxerxes instead of Bessus, and asserting that he was king of Asia. They said he had in attendance upon him the Persians who had escaped into Bactra and many of the Bactrians themselves; and that he was expecting the Scythians also to come to him as allies. Alexander, having now all his forces together, went towards Bactra, where Philip son of Menelaüs came to him out of Media with the Greek mercenary cavalry which were under his own command, those of the Thessalians who had volunteered to remain, and the men of Andromachus. Nicanor, the son of Parmenio, the commander of the shield-bearing guards, had already died of disease. While Alexander was on his way to Bactra, he was informed that Satibarzanes, viceroy of Areia, had killed Anaxippus and the horse-lancers who were with him, had armed the Areians and collected them in the city of Artacoana, which was the capital of that nation. It was also said that he had resolved, as soon as he ascertained that Alexander had advanced, to leave that place and go with his forces to Bessus, with the intention of joining that prince in an attack upon the Macedonians, wherever a chance might occur. When he received this news, he stopped the march towards Bactra, and taking with him the Companion cavalry, the horse-lancers, the archers, the Agrianians and the regiments of Amyntas and Coenus, and leaving the rest of his forces there under the command of Craterus, he made a forced march against Satibarzanes and the Areians; and having travelled 600 stades in two days came near Artacoana. Satibarzanes, however, no sooner perceived that Alexander was near, than being struck with terror at the quickness of his arrival, he took to flight with a few Areian horsemen. For he was deserted by the majority of his soldiers in his flight, when they also learned that Alexander was at hand. The latter made rapid marches in pursuit of the enemy, killed some of the men whom he discovered to be guilty of the revolt and who at that time had left their villages, fleeing, some one way, some another; and others of them he sold into slavery. He then proclaimed Arsames, a Persian, viceroy over the Areians. Being now joined by the men who had been left behind with Oraterus, he marched into the land of the Zarangaeans,[4] and reached the place where their seat of government was. But Barsaentes, who at that time had possession of the land, being one of those who had fallen upon Darius in his flight, learning that Alexander was approaching, fled to the Indians who live this side of the river Indus. But they arrested him and sent him back to Alexander, by whom he was put to death on account of his guilty conduct towards Darius.

1. Areia occupied what is now the east part of Khorasan, and the west and north-west of Afghanistan. Susia is the modern Tus.

2. Compare the words of Tissaphernes to Clearchus (Xenophon, Anabasis, ii. 6): "Though the king is the only man who can wear the tiara erect upon his head, I shall be able to wear mine erect upon my heart in, full confidence, when you are in my service." Cf. Curtius (iii. 8); Aristophanes (Birds, 487). The cap of the ordinary Persians was low, loose, and clinging about the head in folds; whereas that of the king was high and erect above the head. From Xenophon (Cyropaedia, viii. 3, 13) we learn that the Persian king's, vest was of a purple colour, half mixed with white, and that no one else was allowed to wear this mixture of white. He had loose trousers of a scarlet colour, and a robe entirely purple. Cf. also Strabo (xv. 3), where the tiara is said to be in the shape of a tower; and Seneca (De Beneficiis, vi. 31); Ammianus, xviii. 8, 5.

4. These people are also called Drangians. They lived west of Aiaohosia in Drangiana.