Note - Please click → Bahadurgadh for details of similarly named villages at other places. 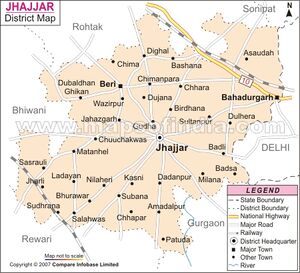 Location of Bahadurgarh in Jhajjar district

Bahadurgarh (बहादुरगढ़), is a prominent Tehsil town of Haryana which may eventually take the shape of a district in near future. It was earlier part of Rohtak district, but now falls in district Jhajjar. Its prime location makes it attractive for business and important for political activities too. Bahadurgarh is situated just on Delhi border, on NH-10, also well connected by rail. 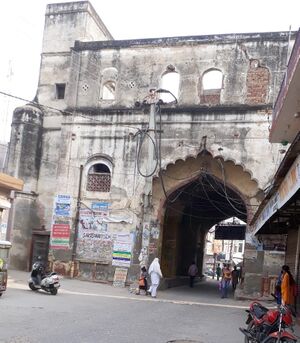 So far as old town is concerned, it has two parts - one is old bazaar which is mainly managed by Punjabis who settled down here after the Muslims left the place in 1947. The adjoining village, famous as Jattwadda (जटवाड़ा), consists of mainly Rathi gotra Jats.

"Bahadurgarh" name is believed to be originating from Nawab Bahadurjang of the Moghul period. The Nawab of Bahadurgarh in 1857 had taken part in the War of Independence. Haryana's princely states of Jhajjar, Farukhnagar, Rewari, and Ballabhgarh were also part of armed revolt against the British. Hence, all these states were abolished by Britishers after the war.

Bahadurgarh is now having a big industrial area, including Parley Biscuits, Hindustan National Glass Industries and Somani Tiles. It also has several modern colonies developed by Haryana Urban Development Corporation (HUDA). Now, some private builders are also developing some sites. The very location of the town is attracting builders and industrialists. In new residential colonies, mainly people from Haryana have built their houses. Presence of people from other states is very rare.

Bahadurgarh is the gateway to Haryana on the north-west. For the outsiders, it looks strange as there is no good hotel to stay in, except one Chhoturam Dharamshala. All around the town, there are Jat-belt villages and town-culture has not really come up despite mushrooming bazaars and shops. The railway station is having the old structure built during the British times, despite the fact that all important trains stop here. The town is now famous for its industries and estate business and notorious for growing crime rate, land mafias, liquor smuggling and others evils, on account of its proximity to National Capital.

Bahadurgarh Village in Etah, UP

'Bahadurgarh is also the name of a village in Etah district of Uttar Pradesh under Etah Tahsil.

Bahadurgarh is also the name of a village in Patiala district of Punjab (under Dera Bassi Tahsil).