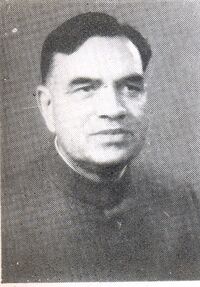 He was born in Jat family of Panchkosi village of Firozpur district in Punjab on Aug 23, 1923. His father's name is Chaudhari Rajaram Jakhar and mother's name is Patodevi Jakhar.

He got a degree in Sanskrit from Foreman Christian College, Lahore, in 1945. He has knowledge of English, Hindi, Urdu, Sanskrit and Punjabi languages.

As Speaker of Lok Sabha he was instrumental in automation and computerization of Parliamentary works. He promoted Parliament Library, Reference, Research, Documentation and information services for the knowledge and use of members of Parliament. The establishment of Parliament Museum is his another contribution.

He was first Asian to be elected as Chairman of Common Wealth Parliamentarians Executive Forum.

Dr Balram Jakhar was lifelong president of Bharat Krashak Samaj and president of Jalianwala Bagh Memorial Trust Management Committee. He has written a book- People, Parliament and Administration. Basically he was a farmer and loved Horticulture. He always tried to introduce the scientific techniques in agriculture to increase the production. The president of India awarded him "Udyan Pandit" in 1975 for his contribution to Horticulture. Haryana Agriculture University Hisar and Gurukul Kangri Visvavidyalaya Haridwar had awarded him the "Doctor of Science" and "Vidya Martand" honorary degrees for his contribution to the Agriculture and Horticulture.

Sports, Farming and Reading were his hobbies.