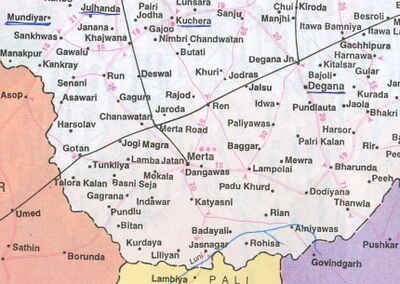 Gotan (गोटन) is a village in Merta tehsil of Nagaur district of Rajasthan.

Hukum Singh Panwar[1] writes that Gotan in Old English [2] is for Jats. The Djat tribes that entered Germany and the Baltic region through the Greece and Turkey retained more or less the then Latin version of their name. Hence, in old German they were Goth, who ransacked Britain in 395-423 AD. The were described as Gothi (in plural) in later Latin, Gotoi or Gothoi in Greek, and Gutos or "Gothoi" in Greek, and Gutos or Guttones in the Baltic countries ,Guta; Gotos or Guts in Germany Gotan in Old English4 ,and Gotar in Old Norse.

This village is situated at a distance of 80 km from Nagaur. It is well connected by rail and road. The village is 500 years old. There was thousands of bigha of grazing land in the village; the village got its name from go+than meaning the place for cows.

Jats in the village

The village is converting into an industrial township due to existence of J.K. White cement factory. In addition, there are about 50 limekilns, five hydrated lime plants and colour-paint plant.

Main occupation of villagers is agriculture but most of Jats are in government services, Limekilns, shops, business etc. 80% Jats are educated. The village has temples of Hanumanji, Mahadeoji, Satyanarayan, and a place of live samadhi of Ramdas – Syamdas and their temple.