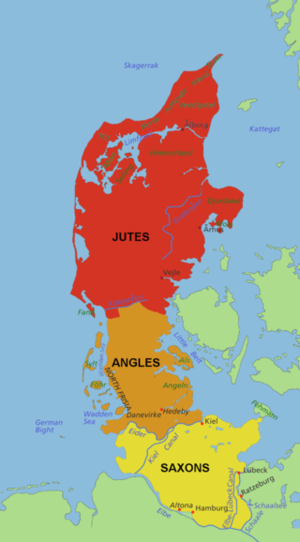 Possible locations of the Angles, Saxons and Jutes before their migration to Britain 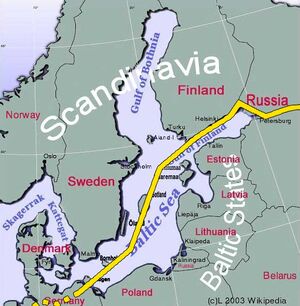 According to Bede,[1] the Jutes were one of the three most powerful Germanic peoples of their time in the Nordic Iron Age,[2] the other two being the Saxons and the Angles.[3]

The Jutes are believed to have originated from the Jutland Peninsula (called Iutum in Latin) and part of the North Frisian coast. In present times the Jutlandic Peninsula consists of the mainland of Denmark and Southern Schleswig in Germany. North Frisia is part of Germany as well.

The Jutes invaded and settled in southern Britain in the late 4th century during the Age of Migrations, as part of a larger wave of Germanic settlement in the British Isles.

Dalip Singh Ahlawat[4] writes that Jat Blood flows in the people of England as the Celts, Jutes, Angles, Saxons and Danes were descendants of Scythian Jats. This is evident from Jat Clans surnames still prevalent in England though they follow Christianity. [5]

Alistair Moffat[6] writes...Vortigern is a title which is version of Vawr Tigherna, or Overlord, a Celtic description of a man who may have High King of southern Britain. Vortigern invited then Germanic Warriors of Horsa and Hengest, as the Picts of the North had been raiding in Britannia for at least a century - Gildas called them ‘transmarini’ - and the Vortigern or overlord needed mercenaries to contain them. It has been characterized as one of the most spectacular misjudgments in British history. The Anglo-Saxon Chronicle gives a more complete report of events:

449. In this year Mauricius and Valentinian obtained the Kingdom and reigned seven years. In their days, Hengest and Horsa, invited by Vortigern, King of Britain, came to Britain at a place which is called Ypwines fleot (Ebbsfleet) at first to help the Britons, but later they fought against them. They then sent to Anglein, ordered them to send more aid and to be told off the worthlessness of the Britons and of the excellence of the Land. They then sent them more aid. These men came from three nations of Germany: from the Old Saxons, from the Angles, and from the Jutes.

Alistair Moffat[7] writes... The Vortigern wanted the Germanic warriors to go away from Britain. But they did not go. A Barbarians Rebellion flared in the South East, and it seems that three battles fought around London and Kent were lost by the British. The Germanic incomers seized more land and began to settle. Bede is clearest on the territory they took:

From the Jutes are descended the people of Kent and the Isle of Wight and those in the province of the West Saxons opposite the Isle of Wight who are called Jutes to this day. From the Saxons - that is, the country now known as the land of the Old Saxons - came the East, South and West Saxons. And from the Angles - that is, the country known as Angulus, which lies between the province of the Jutes and Saxons and is said to remain unpopulated to this day - are descended the east and the Middle Angles, the Mercians, all the Northumbrian stock (that is, those people living north of the River Humber), and other English peoples.

Homeland of the Jutes 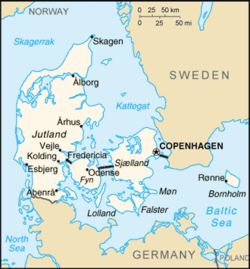 Bede places the homeland of the Jutes on the other side of the Angles relative to the Saxons, which would mean the northern part of the Jutland Peninsula. Tacitus portrays a people called the Eudoses living in the north of Jutland and these may have been the later Iutae. The Jutes have also been identified with the Eotenas (ēotenas) involved in the Frisian conflict with the Danes as described in the Finnesburg episode in the poem Beowulf (lines 1068–1159). Others have interpreted the ēotenas as jotuns ("ettins" in English), meaning giants, or as a kenning for "enemies".

Disagreeing with Bede, some historians identify the Jutes with the people called Eucii (or Saxones Eucii) who were evidently associated with the Saxons and dependents of the Franks in 536. The Eucii may have been identical with an obscure tribe called the Euthiones (Ευθίωνες in Ancient Greek) and probably associated with the Saxons. The Euthiones are mentioned in a poem by Venantius Fortunatus (583) as being under the suzerainty of Chilperic I of the Franks. This identification would agree well with the later location of the Jutes in Kent, since the area just opposite to Kent on the European mainland (present-day Flanders) was part of Francia. Even if Jutes were present to the south of the Saxons in the Rhineland or near the Frisians, this does not contradict the possibility that they were migrants from Jutland.

Asser in his Life of Alfred claims that Alfred's mother, Osburga, was descended from the Jutes of the Isle of Wight,[8] whom he identifies with the Goths. Another modern hypothesis (the so-called "Jutish hypothesis"), accepted by the Oxford English Dictionary, states that the Jutes are identical with the Geats of southern Sweden.

In primary sources the Geats are referred to as Eotas, Iótas, Iútan, and Geátas. However, in both Widsith and Beowulf, the Eotenas in the Finn passage are neatly distinguished from the Geatas. It may be that the two tribal names happened to be confused, which occurred in the sources about the death of the Swedish king Östen for example.

It is possible that the Jutes were related to the Geats and a Gothic people, as it is mentioned in the Gutasaga that some inhabitants of Gotland left for mainland Europe. Large grave sites were found at Willenberg, Prussia (now Wielbark, Poland). The finds were attributed to Goths or Gepids. 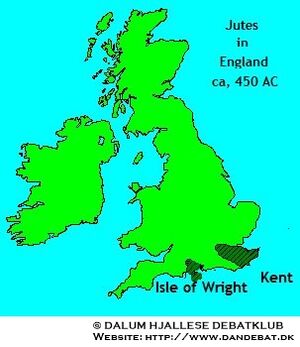 The Jutes, along with some Angles, Saxons and Frisians, sailed across the North Sea to raid and eventually invade Great Britain from the late 4th century onwards, either displacing, absorbing, or destroying the native Celtic peoples there. According to Bede, they finally settled in Kent (where they became known as the Cantuarii), Hampshire (in Wessex), and the Isle of Wight (where they became known as the Uictuarii). There is some evidence that the Haestingas people who settled in the Hastings area of Sussex, in the 6th century, may have been Jutish in origin.[9] There are also a number of toponyms that attest to the presence of the Jutes in the area, such as Ytene, which Florence of Worcester states was the contemporary English name for the New Forest. Also the Meonwara who settled the Meon Valley area of Hampshire.[10]

While it is commonplace to detect their influences in Kent (for example, the practice of partible inheritance known as gavelkind), the Jutes in Hampshire and the Isle of Wight vanished, probably assimilated to the surrounding Saxons, leaving only the slightest of traces. One recent scholar, Robin Bush, even argued that the Jutes of Hampshire and the Isle of Wight became victims of a policy of ethnic cleansing by the West Saxons. This has been the subject of debate amongst academics, with the counter-claim that only the aristocracy might have been wiped out. Bede is the only historical evidence and he clearly implies that this was so, in 686.

The culture of the Jutes of Kent shows more signs of Roman, Frankish, and Christian influence than that of the Angles or Saxons. Funerary evidence indicates that the pagan practice of cremation ceased relatively early and jewellery recovered from graves has affinities with Rhenish styles from the Continent, perhaps suggesting close commercial connections with Francia. The Quoit Brooch Style has been regarded as Jutish, from the 5th century.

Prof. B.S. Dhillon[11] writes - As per Webster's Encyclopedic Dictionary [12], the word "Jute" is defined as "a member of a Germanic [13] tribe, probably from the mouth of the Rhine, who settled (5th century A.D.) In England In Kent, Hampshire, and the Isle of Wight". Professor Wilson [14] said Jutish warriors under their leaders, Henglst and Horsa, arrived In Kent around 450 A.D. at the Invitation of a British ruler in Kent known as Vortlgern to defend him from the Scots and Plcts.

After a number of years of service to Vortlgern, they (Jutes) turned against him and killed many Britons and then took possession of Kent. This opened the door for the arrival of more Jutes from the Continental Europe. Many historians believe that Jutes came to Kent from the lower Rhine area and their agriculture system resembled the one used In Gaul [15]. This judgment appears to be correct and we must also remember that the Alans, a branch of Massagetae ("great Jats") were also well settled by 450 A.D in Gaul. Furthermore, as per Professor Bachrach [16], "After their defeat Alans and Vandals apparently moved northward and east Into Germany beyond the Rhine frontier and outside the Roman Empire. The Rhine frontier was largely undefended; both (for Romans) the Franks, who dwelt along the river, and the second-line defenders, the Sarmatians military colonists (known as laetl), who had been settled further to the west during the fourth century ".

Other factors pointing to the Scythian origin of the Jutes are as follows:

History and study of the Jats: End of p.97

A Kentish custom [27] in the Middle Ages practiced "extreme individualism and the division of the tenement into separate holdings among each generation of heirs". Furthermore, in the division of father's property [48], the youngest son, appear to have been entitled to the family hearth or homestead on making compensation to his brothers". Similar customs are also practiced even today among South Asian Jats.

The actual word used in Punjab for Jats is "Juts" are almost identical. Furthermore, some English family names such as Gill, Bain, and Mann are identical to the family names of the Jat Sikhs in particular.

British elites such as Gen. Sir MacMunn [28], Col. Sleeman [29], and Col. Tod [30] must have had some reasons to believe that the" Jats" and Jutes were the identical people.

Scythians, Sarmatians, and Alans who traveled thousands of miles from their homeland in Central Asia to settle in Europe make it quite impossible to believe if their descendants did not venture into British Isles, without even taking Into consideration any historical record; especially in the case of the Alans who not only went as far as Spain and Portugal but also crossed Into north Africa and then attacked Rome. As per Professor Bachrach [31] some Alans also settled in Brittany (nineteen miles from the English coast!).

Even if we overlook all the above overwhelming evidence and still conclude that the Jutes originated from Scandinavia, a Scandinavian chronicler [32], stated, regarding the Scythian origin of the Scandinavian people, "certain tribes when they had migrated from Scythia Into this region, called It Scythia, as If it were worthy of the name of their first country. Moreover, those tribes I don't know why for some reason they were called "Getae" were also called "Massagetae" ("great" Getae or Jats) after they entered this region. Then, as is usual, when the name had been changed, those who were formerly called "Getae" and afterwards "Gothi".

In conclusion, it appears the Jets or the Scything people entered British Isles in ancient times at least at three different occasions: Jutes, Samartian cavalrymen to serve Roman Interests [33] and the Alan of Corlai [34]. Even after hundreds of years of their assimilation into the local population, strangely, some of the British family names are Identical or very similar to that of the South Asian Jats. Today, there are at least half million Jat Sikhs (some of them fourth generation) who reside in Great Britain and the native British people find It quite strange to have similar or identical family names with some of them.

History and study of the Jats: End of p.98