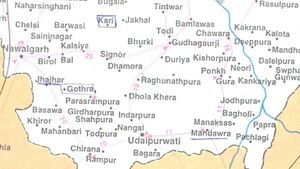 Location of Jakhal in Jhunjhunu district

Jakhal (जाखल) is a village in tehsil Nawalgarh of Jhunjhunu district in Rajasthan.

Jakhal was founded by Salehadi Singh Shekhawat on August 9, 1732 (Teej of Sravana Shukla 1789). Salehadi Singh was younger brother of Shardul Singh, the Jagirdar of Shekhawati at that time. He was also the commander of his brother's army. He fought several wars on the behalf of his borther. Once his brother sent him to win Bhorki. However, he has to stay in Jakhal before attacking Bhorki. He was kind of impressed with the natural beauty of the area and decided to conquer the area from the local warlord. The warlord decided to keep quite because he knew the stories about Salehadi Singh's bravery. Somebody wrote a verse in Rajasthani in the memory of Salehadi Singh's victory over the warlord:

In 1735, Salehadi Singh built a fort (burj) in Jakhal. It is believed that Sikar's king Laxaman Singh destoyed parts of this burj in a cannon attack. The remains of this burj is still there. Salehadi Singh's four sons - Samarth Singh, Sangraam Singh, Sher Singh, and Gulab Singh - decided to stay in Jakhal and their descendants still live in Jakhal.

Jakhal is located at 27.51° N 75.15° E. It has an average elevation of 375 metres. Jakhal is loacted in the semi-desert area of the Thar Desert, the surrounding area is predominantly covered with sand dunes.

To the north of Jakhal is Bugala, Ajari, Baragaon, Jhunjhunu. To the east of Jakhal is Sonthali, Titanwar, Gudha Gorji ka. To the south is Bhorki, Inderpura, Udaipur Shekhawati, Dhamora. To the west is Kari, Barwasi, Nawalgarh, Mukundgarh, Sikar.

Major population in the village is of Shekhawat Rajputs about 1000 families followed by Muslims 500 families and Jats 200 families.

Jakhal is also a Jat Gotra found in Rajasthan.

RFN OM PRAKSH JAKHAL - The Rajputhana Rifles, OP RAKSHAK(J&K) MARTYR from Rajasthan is a notable person from this gotra.