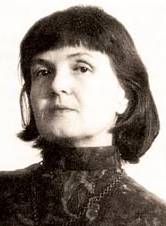 Dr. Natalya Romanovna Guseva (Russian: Наталья Романовна Гусева) was a Soviet and Russian ethnographer, historian, one of the leading Indologists of Russia, a well-known specialist in Indian culture and Indian religions, and author of 160 scientific works on culture and ancient forms of religion of Indians and Slavs. She was also a playwright.

She had resided in Delhi for a long time for her field research.[1]

Natalya Romanovna Guseva (née Chetyrkina) was born on 21 March 1914 in the village of Rubezhovka, Kiev province. She was two years old when her mother died. Since 1921, she and her brother were raised by their grandmother's sister Vera Ilyinichna Urazova, a representative of the ancient Smolensk noble family, who was a classy lady at the Saint Petersburg Orphanage Institute of Emperor Nicholas II before the revolution.

Natalya Romanovna Guseva was the great-granddaughter of the remarkable representative of the Smolensk clan, Roman Sergeyevich Chetyrkin, who was a major infectious disease specialist, author of many books, articles, and instructions on medical issues.

In 1940, she graduated from the Indian department of the Faculty of Philology of Leningrad State University (now, Saint Petersburg State University, Russian Federation). Without hesitation, she chose the branch of Ancient India; and since then, Sanskrit, culture and religion of India became her scientific destiny. She did her doctorate in the History stream (Qualification known in Russia as: Doctor of Historical Sciences).

In the period from 1944 to 2000, she worked as a leading researcher at the Institute of Ethnology and Anthropology of the USSR Academy of Sciences. From 1961 to 1963, she worked in India and collected rich material for her research.

She was a recognized authority in terms of studying the past of the Aryans and Slavs. She compared the ancient forms of culture of the Slavs and Aryans, illustrating examples of their similarity in language and religion. The roots of similarities go back thousands of years, in the era of the life of the ancestors of all Indo-Europeans in the Arctic.

Since 1976, she was member of the Union of Writers of the USSR. She composed an adapted retelling of two great epic poems - the great epics of India "Ramayana" and "Mahabharata". She wrote significantly about the customs, beliefs, views of the people of India.

The Government of India praised the contribution of Natalya Romanovna Guseva to the development of cultural ties between Russia and India.

Natalya Romanovna Guseva died on 21 April 2010, at the age of 96, in Moscow. She bequeathed to cremate her, take her ashes to India and scatter them over the sacred river Ganges.

Natalya Romanovna Guseva wrote that the Jats are the descendants of the Sakas.[2]

Speech at Embassy of Republic of India