Note - Please click → Dewas for details of similarly named villages at other places. 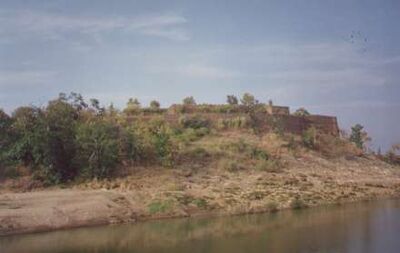 Dewas (Hindi: देवास) is a town situated on the Malwa plateau in the West-central part of indian state called Madhya Pradesh. It is the administrative center of the Dewas District, and was formerly the seat of two princely states during the British Raj. Today, Dewas is an industrial town, with companies like Ranbaxy and Tata International being prominent players. Tekri, a hillock, which is in the centre of the town, holds a panoramic view.

The name Dewas is derived from the Devi Vaishini hill near the city. The hill has some a temple of deity Devi Chamunda. The word Dewas is also believed to be a sandhi of words Dev (deity) and Vas (Hindi for abode), thus Dewas means abode of the deity or god.

Dewas lies northeast of Indore, southeast of Ujjain, and southwest of Shajapur. The town is located on the level plains of the Malwa plateau; to the south, the land rises gently to the Vindhya Range, which is the source of the Chambal and Kali Sindh rivers that flow north through the district on their way to the Ganges. Dewas lies at the foot of the conical Chamunda Hill, on the summit of which is the Devi Vindhyavasini temple. Nagara, which is home to Jain and Hindu temple ruins, lies just south of the city of Dewas.

Dewas boasts many Industrial units providing employment to thousands of industrial workers. It has a couple of industrial areas on Indore road and also few pockets of industries on Ujjain road.

Bank Note Press - Bank Note Press, Dewas, an industrial unit of Government of India, ministry of finance, Department of Economic Affairs, was conceived in the year 1969 and estiblished in 1974.

Dewas is an Industrial town of the state. It has got many mid-sized and small industries under its belt. The big wigs include Tatas, kirloskers, Arvind mills, S Kumars, Tata - Cummins, Gajra Gears, Ranbaxy Labs, Steel Tubes, Bank Note press (which prints majority of Indian currency notes. Very few people know about this outside dewas). The rapid industrialization took place in the late 70s and early 80s. But due to inadequate infrastructure, the pace is very slow since late 80s. Still there are big units churning out profits. Dewas is known as Soya capital of India. Dewas has got major share in the soyabean processing in India.

In recent years, few industries have closed their operations due to shortage of sufficient infrastructure to support growth. Main is shortage of water as water table has significantly gone down due to excessive usage in previous decades.

Due to its high location above mean sea level and at one corner of plateau, constant wind flows in the region making it perfectly suited for harvesting wind energy. MP wind farms have chosen an ideal location for planting more than 100 huge monster like wind mills on a hill some 13 km from DEWAS. It generates around 15 megawatts of power. Few private companies have financed these to get un interrupted power supply.

Dewas Jn.(DWX), is a Standard Broad Gauge Railway Station which belongs to Ratlam Division of Western Railway (India) Zone, is well connected with all major cities of india.

Dewas Junction lies on Indore - Ujjain branch line and it has one line originating and going towards Maksi Junction which connects Nagda Bhopal WR-CR link line. Indore - Ujjain line is not electrified and diesel engines mostly WDM2/3 pull trains on this sector.

All trains, including superfast and express trains, stops here.

There are regular buses, both by state run transport services as well as private operators for nearby towns.

Public transport services are not well developed and restricted to only tempos on Mumbai Agra road and few Auto rickshaws with fixed rates. It is advisable to fix the rate before boarding as they do not run on meters.

Dewas has always been a home of a special community named SEMAD & LAAGAR. Both have a common speciality known as HOMOLO. You can address any SEMAD community people as SEMI. For LAAGAR ones its just Laagar. Semad doesn't migrated from Dewas but Laagar people left dewas and most of them have settled in Riyadh(A famous place in Saudi). Dewas was formerly the capital of not one but two princely states of British India. The original state was founded in the first half of the 18th century by the brothers Tukaji Rao (senior) and Jivaji Rao (junior), from the Pawar clan of Marathas, who advanced into Malwa with the Maratha Peshwa, Baji Rao, in 1728. The brothers divided the territory among themselves; their descendants ruled as the senior and junior branches of the family. After 1841, each branch ruled his own portion as a separate state, though the lands belonging to each were so intimately entangled, that even in Dewas, the capital town, the two sides of the main street were under different administrations and had different arrangements for water supply and lighting. The senior branch had an area of 446 sq. mi. and a population of in 62,312 in 1901, while the area of the junior branch was 440 sq. mi. and had a population of 54,904 in 1901. Both Dewas states was in the Malwa Agency of the Central India Agency. After India's independence in 1947, the Rajas of Dewas acceded to India, and their states were integrated into Madhya Bharat, which became a state of India in 1950. In 1956, Madhya Bharat was merged into Madhya Pradesh state.[2]

A lovely and highly informative account of life in Dewas at the eve of Independence is provided by E. M. Forster in his book, The Hill of Devi. The title of the book itself refers to the hill on which the temple to Chamunda is located. E. M. Forster was private secretary to the raja of Dewas Senior, and is perhaps best known for his far more famous work, A Passage to India, which was made into an Oscar winning movie by Sir David Lean, starring Victor Bannerjee and Sir Alec Guinness.

Joga Fort is an ancient fort built by Jats situated on the border of Dewas and Harda districts in Madhya Pradesh. It is located in the middle of Narmada River at a distance of 8 km from a small town called 'Bai Jog Bada'. It is a beautiful tourist spot full of natural beauty and biodiversity.

This fort was built by two Jat warrior brothers Bhoga and Joga. They were contemporary of Alha and Udal warriors in the Army of Chandel rulers. Chandela rulers made them the governor of Nimar province where they ruled continuously till the rein of Mugals and Marathas. The great warrior Joga Singh Rao got constructed this fort. The elder brother Bhoga was killed in a war and Joga ascended to the throne. The folk tradition reveals that Joga loved one Gujar woman. It is believed that even after becoming the rani, the Gijari used to go by a secret route to take bath in the Narmada River and bring drinking water herself. There is a large population of Jats and Gujars surrounding the area.

The fort is still a site of unique beauty. The area surrounding the fort in a radius of about 25 km is good natural forest. It is situated on a 1000 metre high island above Narmada waters. It still reveals the history of Jat warriors even after 800 years have passed.

Jat Monuments in the district

Dewas district is the site of following Jat Monuments: