Location of Behror in Alwar District

Jat Behror (जाट बहरोड़) is a village in Mundawar tahsil in Alwar district of Rajasthan.

Jat Behror village founded by Mr. Bahram jat Mahlawat with two family now has a population inhabiting 1000 houses.in the views of some elders 4 brothers with families came from sidhmukh and in travelling they stayed few days at behror and there after at jat behror on the name of bahram jat village get name as BEHROR JAT OR AS WELL AS JAT BEHROR , 2 BROTHERS family is still in village and two moved to BAWAL later one moved to CHATA (Near Mathura) this is the reason we got Mahlawat's in Bawal and Chata also. 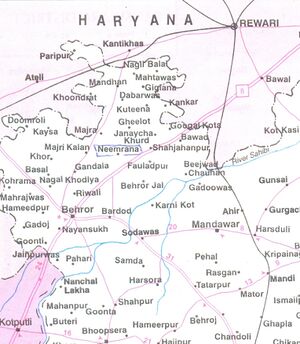 Location of villages around Behror

The major portion of population of the village belongs to Jats. The main Jat gotras are:

Mahalawats of this village known as Mahala too came from Seethal a village in Jhunjhunu distt.via route Sidhmukh (Churu). Mahlawats called Mahal in Punjab are Sikh Jats. Malois as described by Megasthenes were Mahal, Mahala and Mahalawat one and the same. King Puru too was from this clan. At the time Alexander the Great invaded India, Indo-Greek marriages took place. A remarkable similarity may be seen in the faces of this village residents to their Greek ancestors.

This place is famous for its residents serving in Indian Army, Administrative Services Police ,Teaching line and so on. From each Family one or more members can be found in the Indian Army and teaching line. Main business of this village is transportation i.e. Bus services, Carrier Transportation & Taxi services. Besides a number of commissioned officers in Indian Army many of the villagers are serving in Indian Administrative services, Rajasthan Administrative Services and Rajasthan Police Services too. Doctors and engineers are in abundance. Peoples of this village are also serving abroad in U.K, Mauritius, Netherlands and Rome. Literacy is very high.Girls education is a must in this village.People of this village refrain from smoking altogether nowadays too is a remarkable phenomenon .