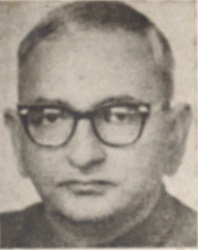 He was from Kakor Kalan village in Bagpat district of Uttar Pradesh state in India. His wife Late Smt.Ganga Devi was a social worker belonging to a prominent family of village Bamnauli (Sardhana) Baghpat . They have four sons

2. Sh. Dev Pal Singh, famous Horticulturist and Landscape architect, who is a post graduate in horticulture and landscape architecture a rare blend of this discipline. He worked as the Director Horticulture eleven and half years in Delhi and remained associated with the social work in the N.C.R as well as worked towards the upliftment of the rural youth by helping them build sound carriers and thus empowering them. He is also strategicaly associated with various enviormental organizations and enviormental projects. He has also worked for the upliftment of the farmer communityand the jat community as President of Parivar Parichay Association of rural jat Gazzeted officers and General Secretary Akhila Bharatvarshiya Jat Maha Sabha. The organisatin is more than 100 years old and has always been headed by the most prominent leaders of the community from hindu muslim Christian jats including Sir Chotu Ram.

3. Sh. Vishva Pal Singh is a post graduate and law degree from Delhi University and worked as a top executive in different organizations particularly General Manager in the oswal Agro (fertilizer) and manager Bhushan Steels, at present working as a consultant.

In The Jat Prajapati Maha-Yagya Sikar

The chairman of the Jat Mahasabha was a follower of the Arya Samaj and it was decided that a great Yagya (prayer ceremony), would be organized, and that venue would be used to make an introduction to the community. A Yagya was a religious function, and therefore permission was granted.

In 1934 it was decided to hold the ceremony at the time of Sharad, per the Hindu calendar, Yagya was called the Prajapati Yagya (Prayer ceremony for the Lord of Universe). The Jat Prajapati Maha-Yagya was organized at Sikar from 20 - 29 January 1934. Kunwar Hukam Singh Rahees Angai (Mathura) was made Yagyapati or Chairman of the Yagya. He had been Chairman of the Arya Prathinidhi Sabha, Uttar Pradesh province and All Arya Prathinidhi Sabha, Delhi, for many years. Chaudhary Kaluram Sunda of village Kudan was the Yagyaman. Acharya Shri Jagdev Sidhanthi received an invitation for this Yagya at his Gurukul at Kirttal, In that invitation was he requested to attend the Yagya and bring twenty Bhramcharis and disciples with him. Volunteers went to all the households in all the villages in the region and collected material that would be needed. They collected Ghee, Flour, Gur, and invited all the householders to participate. Hundreds of cans of Ghee and hundreds of sacks of flour were collected.

When the trains carrying the groups of the Yajaks (organizers of the Yagya), reached Sikar railway Station, they were greeted with growing crowds. Seth Jamnalal Bajaj, who was a staunch supporter of Mahatma Gandhi, was also present at the railway station to greet the Yajaks. In the open sandy land near the railway station hundreds of thousands of men and women from every corner, every village in Rajasthan had set up camp with their families, bullock carts and camel carts. Seeing this vast preparation and gathering, the local Rajput community and the Brahmin community were not only astonished but panicky, and became determined to stop the Yagya. All kinds of tricks were attempted. The Pundits were determined to show the Yajaks as low people.

Objective: The program was scheduled for one whole week. The main aim of this event was to present to , the Jats and other farmers of Shekhawati, the picture of advanced level of the cultural and education development, and the progressiveness of the Jat society in U.P. and elsewhere, so that the Jats of Shekhawati could be inspired to have a desire for education and upliftment.

Jagdev Sidhanthi, per his plan, placed his honour student Raghuvir Singh, at the eastern entrance, as the one learned in the Yagya. Raghuvir Singh was sixteen years old at the time. He spoke fluent Sanskrit, and could recite all the Shastras and Mimamnsas from memory. On the Western entrance he placed Pundit Shanti Swarup, the guru from Gurukul Kirttal, who was a renowned Sanskrit Scholar. The function of these two was to greet the coming pundits in Sanskrit only, to speak to them in Sanskrit, and to give those directions. All the renowned gurus and students of the Sanskrit schools of Jaipur, Sikar, Ajmer, and Jodhpur etc came in small groups. They would first encounter the youth Raghuvir Singh. The students of the Puranic schools were less versed in the speaking of Sanskrit and compared the students of the Arya Samaj schools. In the first day itself the news flashed like wildfire that among the people, who came from Meerut to perform the Yagya, was a young boy who was speaking Sanskrit fluently and rapidly. People started to come from far and wide to listen to Raghuvir Singh.

Along with the Yagya ceremony, Bhajans, and updeshas (sermons) were carried on. The leaders and scholars gave their lectures and held seminars. Sir Chhotu Ram, the acclaimed leader of the common man, had made his debut and mark on the political firmament. He made a speech.

Many prominent persons were present: Thakur Deshraj of Jaghina, the renowned Historian of Jat History, who was devoted his full efforts to the upliftment of the people and the cause of the Jat Sabha (assembly); Advocate , Thakur Jhamman Singh who had been chairman of the Jat Sabha for many years; Richhpal Singh Phogat, (of Dhamera Kirat, Distt Bulandshahr) who was an honorary Magistrate and a minister with the Jat Sabha ; Kunwar Ratan Singh of Mandhona, District Bulandshahr, who was involved and very active in the affairs of Bulandshahr and Bharatpur; Chaudhary Moolchand , who was chairman for many years of the All India Jat Mahasabha and the founder of the Jat Boarding House, Nagaur; Rai Sahib Chaudhary Hariram Singh of Kurmalli, Dist Muzzafarnagar, who was a famous orator; Thakur Sansar Singh one of the founders of the Haridwar Girls Gurukul, Pandit Moolchand Shastri, Pandit Shanti Swarup etc. People were enamored with their inspiring speeches.

One day, in the evening gathering, some puranic brahmins taunted Sidhanthiji that his students were simply parroting in Sanskrit. They were accused of simply having learnt their shlokas (verses) and dissertations, which anyone could do. They said - we will acknowledge your student Raghuvir Singh, if we gave him topic of our choice, and he can speak even a few words on that. Raghuvir Singh accepted the challenge, and the topic given to him - Atma. The entire gathering of Puranic Brahmins was astounded by the extended discourse given by Raghuvir Singh. The people in the audience went wild in their appreciation, but the Rajput community present, were irritated. At The end of the Yagya, Raghuvir Singh made another discourse in Sanskrit, which was translated simultaneously into Hindi by Chaudhary Hariram Singh, which laid a stamp of confirmation on his scholarship.

When the Yagya program ended, the Yagyapati was to be taken in procession seated on an elephant. The Thakur of Sikar had allocated two elephants for this purpose, but the leaders of the Rajput community were unable to tolerate this. They collected in the palace of Raja Rao, and told him they would not tolerate a procession of the elephants with a Jat riding it. Raja Rao was convinced to stop the procession and orders were issued accordingly.

In those days the Chief of Police of the Jaipur state was an Englishman named F.S.Young. He had lived in then United Provinces (modern Uttar Pradesh) and was very popular with the people. Thakur Jhamman Singh, Chaudhary Hariram Singh, and Chaudhary Richpal Singh, knew him personally, and they went to Jaipur to seek his assistance. Mr. Young knew about the Yagya at Sikar, but he had been told that only three or four hundred people were present. The leaders told him that there were three or four hundred thousand people present, and could he go and see for himself. Mr. Young flew to Sikar in an aeroplane and flew over, circled and inspected the vast gathering many times. He moved in to the Guest House of the Raja of Sikar and invited both parties for talks. The Rajputs were not ready to bend. In the meantime their Pandits raised a new issue and stated that there was no such term as ‘Yagyapati’ in the Vedas, and therefore the question of a procession of the Yagyapati did not arise. Mr. Young asked the Yagya organizers for a response. Raghuvir Singh was asked this question. He gave a discourse of the place of Yagyapati in the Vedas, opening the books of the Vedas, marked innumerable places in the Vedas, where the term ‘Yagyapati’ appeared and put that in front of Mr. Young. The Puranic Pandits were stunned. Mr. Young then said to Rao raja - Now what do you have to say? These people are trying to spread learning and knowledge in this backward region and you are opposing them? See their students, how much of a grip and authority they have over their subject!

The Rajputs refused to budge. They threatened to shoot guns at the procession. The people were however so enthused that they were ready to face the bullets, make the greatest sacrifice, and were determined to see the procession take place. The Jat leaders however, showed great presence of mind and a compromise was reached that the procession would take place, but no Jat would sit on the elephant. Some Pandit with a book of the Veda would sit instead. One more obstacle was raised that in the Arya Samaj followers there was no birth born caste brahmin. In the Jats group there was only one caste born Brahmin, Pandit Khemchand Mandawar of Rajasthan, who was also a staunch Arya Samaj follower. His name was only agreed to after he had to pay two amounts 500 Rupees each as two individual bonds as surety that he was a born into the brahmin caste. As Pandit Khemchand sat upon the elephant with his Veda book, one small child of Thakur Deshraj was quietly seated with him in his lap.

The procession started but the gates to the city of Sikar were closed by those in opposition. Sikar was surrounded all around with very high walls. The gates being closed the Procession had to return from outside. The citizens of Sikar still saw the procession, as they climbed on to the rooftops, the trees and the walls, to see this vast procession.

During the Yagya, 3000 men and women adopted the Yogyopavit, which was a symbol Kisan sangathan. Sheetal Kumari daughter of Kunwar Netram Singh adopted yagyopavit. Chaudhary Chimana Ram of Sangasi brought his wife wearing salwar-kurta. The unity of Jat farmers had terrified the Jagirdars of Sikar. The role played by Sardar Har Lal Singh and Thakur Deshraj was unparallel which made this yagya a grand success.