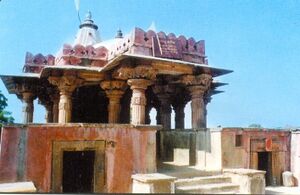 These people were inhabitants of areas near Kabul, hence known as Kawala.[4]

Usha Agarwal [5]writes about a village named Kanwla (कंवला) in Bhanpura tahsil in Mandsaur district in madhya Pradesh. It is 145 km from Mandsaur and 11 km from Bhanpura and situated near Sojalpur village. Its ancient name was Kamalpur (कमालपुर).

In the history of Chauhans we find mention of one Kawal Raj, who is probably originator of this clan:

H.A. Rose[6] writes about Chauhan (चौहान), a great Rajput tribe, one of the Agnikulas, and also one of the 36 (royal) ruling races. Tod calls them the most valiant of the whole Rajput race, and to them belonged Pirthi Raj, the last Hindu ruler of Hindustan. Before the seat of their power was moved to Delhi, Ajmer* and Sambhar in Jaipur seem to have been their home. After their ejectment from Delhi they are said to have crossed the Jumna to Sambhal in Muradabad, and there still dwell the genealogists and bards of the Chauhan of the Nardak† of Karnal and Ambala in which Districts they have retained their dominant position more than elsewhere in the Punjab.

The Chauhans in Ambala claim to belong to the Bachas got and to be of Surajbans descent. In this District they hold 169 villages, and their traditions give them the following pedigree and history :-

* The Ambala traditions mention Alal-kundor-puri as their seat before Ajmer was founded. They also add that Rana Har Rai founded Jundla in the Panipat tahsil: thence the Chauhan spread northwards. In Karnal their chaudhriats are Gumthala, Rao Sambhli, Habri and, chief of all, Jundla.

† For the Chauhan migrations and their conquest of the Pundirs see the article on Raputs.

†† Rana Harra also had four illegitimate sons, by a Rorni, a Gujari, a Jatni and a Hujamni respectively. The latter's son. Kawal Raj, founded a bāra or group of 12 villages, of Rajputs : the Jatni's son, Bhadhi, was the ancestor of the Mudhul Jats who hold two bārās, one in Kalsora in Thanesar, the other in Saharanpur. But the Karnal tradition is different. It assigns to Rana Harrai two Rajput wives and five of inferior status, viz., Rorni, wose descendants form the Dopla got of the Ror's, a Jatni, a Gujari, a Jogin and a Nain. The descendants of the two latter are the Rajputs of Mustafabad pargava in Jagadhri tahsil, while the Jatni's and Gujari's progeny appear to have settled east of the Jumna.

§ Rantha or Ranta was the son of Rana Har Rai's old age and his step-brothers disputed his legitimacy. So he appealed to the king of Delhi and his mother said that she had fed the Rana on dolah, a fish supposed to possess aphrodisiac qualities. The king declared that Ranti's sweat would smell of the fish if he were legitimate, he fulfilled the test and was declared legitimate.