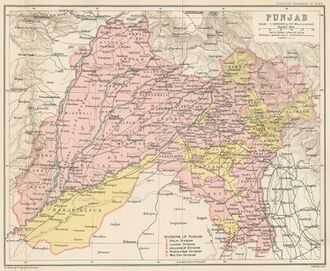 Punjab (Hindi:पंजाब पाकिस्तान, Urdu: پنجاب), "five waters": , also spelled Panjab, is the most populous province of Pakistan, with approximately 55.06% of the country's total population, Forming most of the Punjab region.

Punjab is the most developed, most populous, and most prosperous province of Pakistan. Lahore has traditionally been the capital of Punjab for a thousand years; it is Punjab's main cultural, historical, administrative and economic center. Historically, the Punjab region has been the gateway to the Indian subcontinent for people from Greece, Central Asia, Iran and Afghanistan and Vice-versa. Due to its strategic location, it has been part of various empires and civilizations throughout history, including the Indus Valley Civilization, Vedic civilization, Mauryans, Kushans, Scythians, Guptas, Greeks, Persians, Arabs, Turks, Mongols, Timurids, Mughals, Afghans, Sikhs and the British.

The Greeks referred to Punjab as Pentapotamia, an inland delta of five converging rivers. In Avesta, the sacred text of Zoroastrians, the Punjab region is associated with the ancient hapta həndu or Sapta Sindhu, the Land of Seven Rivers. The British used to call Punjab "Our Prussia." 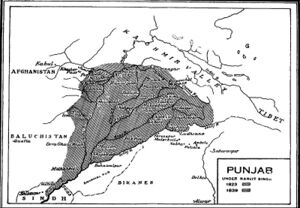 Punjab during Mahabharata times was known as Panchanada.[1] Punjab was part of the Indus Valley Civilization, more than 4000 years old.[2] The main site of the Indus Valley Civilization in Punjab was the city of Harrapa. The Indus Valley Civilization spanned much of what is today Pakistan and eventually evolved into the Indo-Aryan civilization. The arrival of the Indo-Aryans led to the flourishing of the Vedic civilization along the length of the Indus River. This civilization shaped subsequent cultures in South Asia and Afghanistan. Although the archaeological site at Harappa was partially damaged in 1857 when engineers constructing the Lahore-Multan railroad used brick from the Harappa ruins for track ballast, an abundance of artifacts have nevertheless been found. Punjab was part of the great ancient empires including the Gandhara Mahajanapadas, Achaemenids, Macedonians, Mauryas, Kushans, Guptas and Hindu Shahi. Agriculture flourished and trading cities (such as Multan and Lahore) grew in wealth.

Due to its location, the Punjab region came under constant attack and influence from the west. Invaded by the Persians, Greeks, Kushans, Scythians, Turks, and Afghans, Punjab witnessed centuries of bitter bloodshed. Its legacy is a unique culture that combines Zorastrian, Hindu, Buddhist, Persian, Central Asian, Islamic, Afghan, Sikh, and British elements. The city of Taxila, founded by son of Taksh the son Bharat who was the brother of Ram. It was reputed to house the oldest university in the world[citation needed], Takshashila University, one of the teachers was the great Vedic thinker and politician Chanakya. Taxila was a great centre of learning and intellectual discussion during the Maurya Empire. It is a UN World Heritage site, valued for its archaeological and religious history.

The northwestern part of the Indian subcontinent including Punjab was repeatedly conquered into various Persian, Central Asian, and Greek empires, such as those of Tamerlane, Alexander the Great and Genghis Khan. Having conquered Drangiana, Arachosia, Gedrosia and Seistan in ten days, Alexander crossed the Hindu Kush and was thus fully informed of the magnificence of the country and its riches in gold, gems and pearls. However, Alexander had to encounter and reduce the tribes on the border of Punjab before entering the luxuriant plains. Having taken a northeasterly direction, he marched against the Aspii, mountaineers, who offered vigorous resistance but were subdued. Alexander then marched through Ghazni, blockaded Magassa, and then marched to Ora and Bazira. Turning to the northeast, Alexander marched to Pucela, the capital of the district now known as Pakhli. He entered Western Punjab, where the ancient city of Nysa was situated. A coalition was formed against Alexander by the Cathians, the people of Multan, who were very skillful in war. Alexander invested heavy troops; eventually seventeen thousand Cathians fell in this battle, and the city of Sagala (present-day Sialkot) was razed to the ground. Alexander left Punjab in 326 B.C. and took his army to Persia and Susa.

Of particular importance were the periods of contact between Punjab and various Persian Empires[citation needed] when the region either became a part of the empire itself[citation needed], or was an autonomous region which paid taxes to the Persian king. In later centuries, when Persian was the language of the Mughal government, Persian architecture, poetry, art and music were an integral part of the region's culture. The official language of Punjab remained Persian until the arrival of the British in the mid-19th century, when the administrative language was changed to English. After 1947, Urdu, which is considered the poetic language of South Asia, which has a huge section of words derived from Persian, Arabic and to a lesser degree Turkish and with an indic base, became the newly formed Pakistan's national language (Qaumi Zubaan).

There are 36 districts in Punjab, Pakistan.

In addition to the Punjabis, the province is also home to other smaller ethnic groups in the province include the Saraiki, Hindkowan, Kashmiris, Sindhis, Pashtuns, Balochs and Muhajirs.