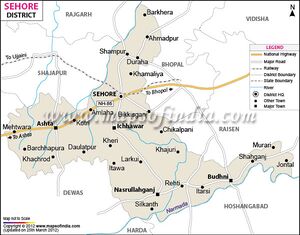 Sehore (सिहोर) is a tehsil and district in Madhya Pradesh.

Sehore stands in the foothills of Vindhyachal Range in the middle of Malwa region. Sehore has a long and glorious past. Shaiva , Shakta, Jain, Vaishnav, Budhists and Nath priests made Sehore a significant seat of their deep meditation. Sehore was a part of Bhopal estate. After formation of Madhya Pradesh, the state capital Bhopal was a part of the Sehore district. It was bifurcated in 1972 and a new district Bhopal was formed.

Ancient lores indicate that Maharshi Patanjali, the illustrious founder of Yoga sect also spent some time here in prayers & worship . Folklore also indicate to the visits of Lord Rama, Laxman nad Sita to its different places. Sehore has so many temples, Mathas, Shrines, Mosques, Churches of great historical and religious antiquity. In that sense, Sehore boasts of its glorious tradition of communal harmony and homogeneous culture.

Sehore has been an integral part of Awanti. Later on it was under the tutelage of Magadha dynasty, Chandragupta I, Harshavardhana, Ashoka the great, Raja Bhoj, Peshwa chiefs, Rani Kamlawati and the Nawabs of Bhopal dynasty. Sehore remained the headquarters of the political agent and resident of the British.

Sehore played a crucial role in the freedom movement of India (1857 movement) . “Nishan-e- Mahaviri and Nishan -e- Mohammadi” remained furling in the place of Union Jack. That short phase of independence from the British clutches ended, when Sir Hurose and Robert Hamilton crushed the uprising by putting 354 patriots to the gallows and gunning down 149 sepoys. Nawabs of Bhopal remained always loyal to the British. That caused heavily to to the efforts of the patriots in order to flush out the British from Sehore.

On 15 thAugust 1947 India got its independence . But estate of Bhopal did not merge with the India state till 1949 and even that after a fierce struggle .

Sehore has got the honour of its achievement in the field of academics and literature. Lanciet Likinson, the political agent got established the first English translation of ” Abhignan Shakuntalam ” in 1835- 40. 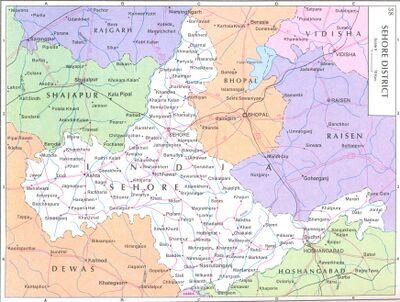 Back to Madhya Pradesh