Ram Swarup Joon[11] writes...Gaharwal, Grewal gotra is from the Chandela dynasty. Some writers have associated them with the Rathores, but other historians have proved that Rathore gotra is from Gaherwal gotra, and is also called Grewal. Sikhs of this gotra are called Grewals. They have 52 villages in district Ludhiana. In Dholpur they are called Ghurwal and in the Punjab, Gharwar. The Gahrawar gotra is found amongst Rajputs also, but there is more Gahrawar Jats than Rajputs.

Ram Sarup Joon[12] writes that...about 70 Jat Gotras joined the Gujar force and started calling themselves Gujars. Gaherwal is one of them.

Garewal (गरेवाल ), an important Jat tribe in Ludhiana, which claims to be of sau or gentle status. Hindu Garewal are also found in Montgomery. [13].

Sikhs belonging to this gotra are known as Grewals. They have 52 villages in district Ludhiana. In Dholpur they are called Ghurwal and in the Punjab, Gharwar. The Gaharawar gotra is found amongst Rajputs also, but there are more Gahrawar Jats than Rajputs. 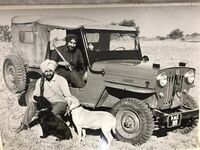 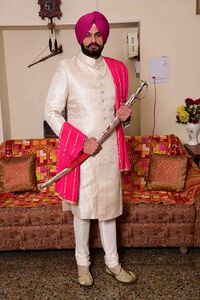 (Scattered Districts given below) -

Gujarwal is a well-known village in the District of Ludhiana, Punjab and almost all of the land owning families of the village are the Grewal or Garewal Jats. Many members (Grewals) of this village held important positions in the British and the independent Indian military, civil and police services, and politics. For example, the Chief Minister of Punjab (probably), Intelligence Chief of the undivided post independent Punjab and Kashmir, College Principals, high ranking military officers, and so on. It appears from the village name that its original name could have been "Grewal", after the land owning Jat families, but over time the name started to be pronounced as "Gujarwal" instead of "Grewal". [15]

Grewal - The Grewal Jat claim Chandel Rajput ancestry. The Muslim branch of the Grewal were concentrated in Ludhiana District. They are now scattered in Faisalabad, Sahiwal and Sargodha districts.