Prabhavatigupta (प्रभावतीगुप्त) was the chief queen of Vakataka King Rudrasena II (356-378 CE). She was daughter of Gupta King Mahārājādhirāja Chandragupta II born of the union with a Naga princess Mahādevī Kuberanaga. Prabhavatigupta has recorded herself born in a Naga family of Dharana Gotra, which at present is found in Jats of Rajasthan, Punjab and Uttar Pradesh.

On the death of Rudrasena II, his queen Prabhavatigupta, the daughter of Chandragupta II (376-413 AD),ruled her husband's kingdom for at least about 13 years, even though she is known to have three sons. Prabhavatigupta issued the Poona copper plate inscription in the 13th year of her rule as the mother of the Yuvaraja Divakarasena. In her Riddhapur copper plate inscription issued in the 19th regnal year of her son Pravarasena II, Prabhavati is represented as the mother of Maharaja Damodarasena and Pravarasena II. [1]

Gotra of Prabhavatigupta was Dharan

In this context we must note that Prabhavatigupta, the daughter of Chandragupta II and chief queen of the Vakataka king Rudrasena II describes herself as belonging to the Dharana gotra in her Poona and Riddhapur copper plate inscriptions. Dharana is clearly the gotra of her father, as the gotra of her husband Rudrasena II is specifically mentioned as Visnuvrddha in the Chammak copper plate inscription of Pravarasena II. [2][3]

K P Jayaswal takes it to stand for Dharan, a Jat clan found in Amritsar, and on the basis of the Kaumudimahotsava he concludes that Chandragupta I was a Karaskara or Kakkar Jat. [4]

This view has been supported by Gokhale.[5]

These copper-plates were found in the possession of one Balwant Bhau Nagarkar, a coppersmith of Poona who originally hailed from Ahmadnagar in the Mahâràshtra State. They are said to hâve been preserved as an heirloom in his family for some générations. They, however, seem to hâve originally belonged to the Hinganghât tahsil of the Wardha District in Vidarbha, for, as shown below, most of the places mentioned in this grant can be located in that tahsil. The plates were at fîrst very briefiy noticed by Prof K. B Pathak in the Indian Antiquary, Vol XLI, pp 214-15. Their importance was immediately recognised and the information furnished by them was utilised by V. A. Smith in his article entitled 'The Vakataka Dynasty of the Central Provinces and Berar' published in the Journal of the Royal Asiatic Society for 1914, pp 317f. They were later edited with facsimiles and an English translation by K B Pathak and K N Dikshit in the Epigraphia Indica, Vol XV, pp 40 f. They are edited hère from the same facsimiles as their présent whereabouts are not known. 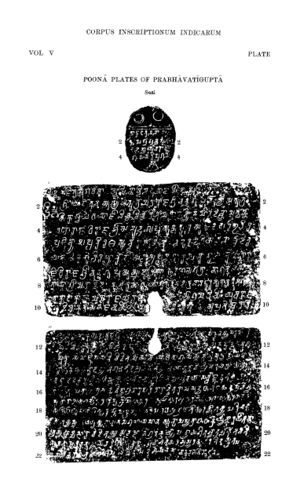 The record commences with drishtam, 'seen'. The plates were issued from Nandivardhana by Prabhavatigupta, the chief queen of the Vâkataka Maharaja Rudrasëna II and mother of the Yuvaràja Divakarasena. She was then acting as Régent for her minor son. The plates record the grant of the village Danguna which the dowager queen made to Âchârya Chanālasvāmin on the twelfth tithi of the bright fortnîght of Karttîka, evidently after observing a fast on the preceding Prabôdhinï Ekâdasî. Prabhavatîgupta is described as a fervent devotee of the Bhagavat (i.e. Vishnu) She first offered the gift to the foot-prints of the Bhagavat, who is probably the same as Râmagirisvâmin mentioned in her later Riddhapur plates, and then made it over to the Achârya The donated village was situated m the Supratishṭha āhāra and lay to the east of Vilavanaka, to the south of Sîrshagrāma (Sirïshagràma?) and to the north of Kadâpiâñjana. The grant is dated in the thirteenth year evidently of the boy-prince's reign. The scribe was Ghakradāsa.

It is noteworthy that though Prabhavatîgupta describes herself as the Chief Queen of the Vâkataka Maharaja Rudrasena II, she gives the genealogy of the Guptas and not of the Vakatakas in the introductory portion of the present grant. This is also noticed in her later grant recorded in the Riddhapur plates. She was evidently very proud ôf her descent from the imperial Gupta family.

The genealogy begins with Maharaja Ghatotkacha, the first king of the Gupta (dynasty). His son was Maharaja Chandragupta I ; the latter's son from the Mahàdevî Kuznâradevi was Mahàrâjàdhiràja Samudragupta, the daughter's son of the Lichchhavi (chief), who performed several asvamedha sacrifices , his son was Mahàrâjàdhiràja Chandragupta II a devout worshipper of the Bhagavat, the latter's daughter from the Mahàdevî Kuberanaga who was born in a Naga family was Prabhavatîgupta. She was the chief queen of the Vâkataka Maharaja Rudrasena II and mother of the Yuvaràja Divakarasena.

It will be noticed that the description of Prabhâvatï's Gupta ancestors given in the present grant does not agree completely with that noticed in genuine Gupta records. In the first place it makes no mention of Gupta, the founder of the dynasty. Secondly, Chandragupta I is mentioned with the lower title of Maharaja, not with the imperial one of Mahàrâjàdhiràja as in Gupta records. Thirdly, some of the epithets used hère to describe Chandragupta II were usually applied to his father Samudragupta Notwithstanding thèse différences, the grant is undoubtedly genuine as we find that the genealogy given hère is repeated Verbatim in the Riddhapur plates of the dowager queen.

The importance of the present grant lies in this that it placed for the first time the Vàkâtaka genealogy (viz. the Chammak, Siwani and Dudia plates of Pravarasëna II) Prabhavatîgupta was described as the daughter of Mahàrâjàdhiràja Devagupta. Fleet identified this Devagupta with

the homonymous king of the Later Gupta dynasty, mentioned in the Deo-Barnark pillar inscription and thus relegated the Vâkâtakas to the eighth century A D. His opinion was accepted by Kielhorn and Sukhtankar. The present inscription, which states clearly that Prabhâvati was the daughter of the Early Gupta king Chandragupta II, proved unmistakably, for the first time, that she lived in the last quarter of the fourth century A D. It has since been shown that Dêvagupta was a favourite name of Chandragupta II and so it finds a mention in Vâkâtaka grants.

As for the localities mentioned in the présent grant,

"Be it known to you that on the twelfth (lunar day) of the bright (fortnight) of Kārttika, We have, for augmenting our own religious merit, donated this village, with the pouring out of water, to the Achārya Chanālasvāmin, who is a devotee of the Bhagavat, as a gift not previously made, after having offered it to the foot-prints of the Bhagavat Wherefore, you should obey all (his) commands, with proper respect.

And there is, on this point, (the following) verse sung by Vyasa — (Hère occurs an imprecatory verse )
Seal

(This is) the enemy-chastising command of the Mother of the Yuvarāja, the ornament of the Vākātakas, who has attained royal fortune by inheritance

These plates were found in the possession of Mahanta Dattarāja of the Mahānubhāva sect. They were discovered at Riddhapur in the Morsi tahsil of the Amarâvatï District in Vidarbha. They hhve been edited twice by Mr. Y R Gupte, first in Marathi in the Bhārata Itihāsa Samsodhaka Mandal Quarterly, Vol. III, Nos 2-4, pp 89 f, and again, with negative facsimiles and an English translation, in the Journal of the Asiatic Society of Bengal, New Series, Vol XX, pp 53 f. The plates are now deposited in the Bhārata Itihāsa Samsodhaka Mandal, Poona. They are edited here from the same facsimiles.

The inscription is one of Mahādevi Prabhavātigupta, the chief queen of the Vakataka Maharaja Rudrasena II and the mother of the Vâkataka Maharaja Damodarasena-Pravarasêna. As shown below, the record is dated in the 19th regnal year of the Vâkataka king Pravarasena II, but, strange as it may appear, the introductory portion of the grant gives the genealogy of the Guptas and not of the Vakatakas. This is also seen in the Poona plates which were issued when Prabhâvatï was acting as Régent for her miner son Yuvāja Divākarasena. The introduction of the Gupta genealogy in the latter grant can be explained as due to the influence of the Gupta officials sent by Chandragupta II to Vidarbha to help his widowed daughter in the government of the Vakataka kingdom.

No such explanation will, however, avail in the present case, for Pravarasena II was a grown up man when the present grant was made. In all his earlier grants he has given his own genealogy in the introductory portion. The use of the Gupta genealogy here must therefore be attributed to Prabhavati's pride in her descent from the Gupta family.

The genealogy of the Guptas is given here exactly as in Prabhâvatî's Poona plates, the only difference being that the imperial title Mahàiàjàdhiràja is here applied only to Chandragupta II, all his predecessors including the great Emperor Samudragupta being styled as Mahārāja. The Vâkâtaka kings Rudrasena II and Pravarasena II mentioned in the grant are also styled as Maharaja Prabhavatïgupta is described as meditating on the feet of the Bhagavat. Like her father, she was a devotee of Vishnu.

The plates were issued from the foot-prints of the lord of Ramagiri who is evidently identical with Ramachandra, an incarnation of Vishnu. The object of the inscription is to record the grant, by Prabhâvatï, of a field together with a house and four huts of farmers in Asvatthanagara which lay in the mārga (subdivision) of Kosika. The donees are not mentioned by name, but are described as Brâhmanas, with or without sons, who were of the Parashara gotra and the Taittirïya sâkhà. The grant is dated, at the end, on the twelfth tithi of the bright fortnight of Karttîka in the nineteenth regnal year of Pravarasêna. As Prabhâvatï was a devotee of Vishnu, she seems to have made the present grant on the occasion of the pâranà (completion) of her fast on the preceding Prabodhinî Ekâdasî. Her Poona grant also was made on a similar occasion. The Dutaka was Dêvanandasvâmin and the scribe Prabhusîmha.

Prabhvâtïguptà is again described in lime 10 as the mother of the Vâkâtaka Mahàrâja, the illustrious Damodarasena-Pravarasena. This expression also has been interpreted differently by different scholars. Dr. Mujumdar says that Dâmôdarasêna and Pravarasëna were two different sons of Prabhâvatï. We must note, however, that the expression uses the phrase Vâkâtakànàm Mahàrâjah in connection with the name of Dàmodarasêna, but not with that of Pravarasena II. When we remember how particular the drafters of Vâkâtaka grants were about the use of this title in connection with the name of every Vâkâtaka king who actually reigned, it looks strange that the title should not have been prefixed to the name of Pravarasena II, who was ruling at the time. Again, if the intention was to name all sons of Prabhâvatï, the name of Divâkarasena also should have been added. It seems probable therefore, that Damodarasena and Pravarasena II were identical and that the latter name was adopted by the prince at the time of his accession.

As for the place-names mentioned in the present grant,

" We have in this town donated the field enjoyed (so far) by Bhuktaka together with a farm-house situated in it (arid) four huts of cultivators, to the Brâhmanas of the Parashara gotra and the Taittirîya sâkhâ, whether they have or do not hâve sons, by pouring out water and issuing a charter for the increase of Our religious merit and (Own welfare) in this world and the next.

And the (following) verse, sung by Vyâsa, should be regarded as authoritative on this point

Back to The Ancient Jats/The Rulers