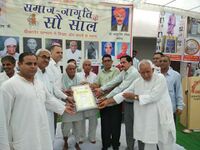 Chaudhari Hari Ram Dhaka being honoured by Jat Kirti Sansthan on 31.8.2017 at Ratangarh 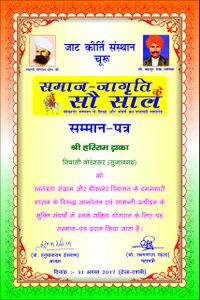 He got early education in village Norangsar under guru Tulsi Ram Sharma in his private school. He got education up to 7th standard in Hanuman Gramya Pathshala Salasar. He went to P.C.V. High School Sujangarh for further studies where he was told that as per orders of Maharaja Bikaner, the Jat boys will not be given admission in the School. Thus he did not get admission in Government School. This incidence hurt him a lot.

In 1943 the freedom movement got strengthened in Bikaner state under Praja Parishad Bikaner, founded by Raghuvar Dayal Goyal, who organized the farmers against oppressions by the Jagirdars. The prominent people of the region who were associated with this organization were:

The home town of Hari Ram Dhaka, Norangsar village, was situated on the tri-junction of Jodhpur, Jaipur and Bikaner States and was influenced by waves of oppression on the farmers by Jagirdars from all the states. Chaudhari Hari Ram Dhaka also felt the heat and decided to join the movement. One night he left the village without the permission of his parents and became underground to take part in the freedom movement. He also decided to impart education to the children of farmers.

Jat Historians[1] mention that Chaudhari Rupram Maan and Swami Chetnanand started the education program of Jat farmers in rural areas of Ratangarh tehsil by opening private schools. They appointed Swami Nityanand and Chaudhari Chandgi Ram for this purpose. Swami Chetnanand was born in the family of a Jat farmer and could feel the effect of oppression by Jagirdars. These people remained under ground and collected money to start the private education of Jat boys. Chaudhari Buddhram Katewa of Bharatia ki Dhani, Ratangarh, Chaudhari Buddhram Dudi village Sitsar and Chaudhari Surta Ram Sewda, Ratangarh helped a lot in this campaign. Chaudhari Surta Ram Sewda gave his own land for starting a school and Chaudhari Buddhram Dudi got made a shade on this land to start a school.

At that time there were about 40-50 Jat boys getting education in Ratangarh town who were mainly from Sihag, Dudi, and Tetarwal Jats of Ratangarh town and rest were from nearby villages like Sangasar, Loonchh, Loha, Chhabri, Kadia, Tidiyasar, Thathawata etc. Most of these boys were from poor families and could not afford education on their own. The only means of funding the private education was through collection of chanda or subscription from the farmers. Jats of Ratangarh and Churu either could not afford or did not give subscription out of fear of the Jagirdars. But the Jats of Ganganagar district were well off and they were not much effected by Jagirdars. They gave handsome amounts for education.

Hari Ram Dhaka and Megh Singh Sewda went from village to village in Churu district and gave momentum to this movement. Tiku Ram Budania, Rupram Maan and Hari Ram Dhaka organized a meeting at village Loha in Ratangarh tehsil. The urban people also came in their support. Mohan Lal Saraswat and Rameswar Pareek from Ratangarh were of great help in the sabha. Jagirdars did their best to disturb the sabha but it continued. It was decided unanimously not to pay the taxes to the Jagirdars and not to obey their orders.

Hari Ram Dhaka and Megh Singh Sewda went from village to village in Churu district and gave momentum to this movement. Tiku Ram Budania of Loha, Budh Ram Dudi of Sitsar, Rupram Maan and Hari Ram Dhaka of Norangsar organized a meeting at village Loha in Ratangarh tehsil on 10 October 1946.[2]

The urban people also came in their support. Mohan Lal Saraswat and Rameswar Pareek from Ratangarh were of great help in the sabha. Jagirdars did their best to disturb the sabha but it continued. It was decided unanimously not to pay the taxes to the Jagirdars and not to obey their orders.[3]

at Historians[4] mention that ....The Jagirdars had tried to prevent the farmers from taking part in Loha Sabha. This sabha at Loha village was quite successful. The Jagirdars were frightened about the decisions taken in this sabha. They approached Maharaja Bikaner from whom they obtained the permission to recover the land and other taxes forcefully. The Jagirdars assembled at village Kangar in Ratangarh tehsil in the fort of Gop Singh Jagirdar. They took the Kaimkhanis of Ratangarh also with them. They were all equipped with swords, guns, barchhis, bhalas etc. Here the Jagirdars decided to recover 20 times taxes forcefully. Looking to these preparations of the Jagirdars, the Jat farmers approached Hari Ram Dhaka and Rupram Maan at Ratangarh.

Hari Ram Dhaka sent Megh Singh, Rupram Maan, Sisram Bhaktopdeshak with the farmers of Kangar to assess the situation at Kangar. They found that the Jagirdars were enjoying drinks and goat meat. They had forcefully snatched goats, sheep, milk, curd etc. from villagers of Kangar. They started doing rape with the village women. Jagirdars dragged the villagers to the fort, beaten them and demanded 20 times taxes. The message spread to nearby villages and Jats also assembled in thousands of number for the counter action. They were also equipped with barchhi, bhala, jeli etc. The situation was very tense. Jats assessed the situation and decided not to have a direct confrontation as it may lead to hundreds of lives on both sides. All farmers consented that they should approach the Bikaner Maharaja to let him know the actual situation. A deputation of 35 agitating farmers was sent to Bikaner under the leadership of Rupram Maan and Megh Singh.

Hari Ram Dhaka along with seven persons reached Kangar. Chaudhari Surja Ram, Jaisangsar and Ganpat Ram Nai had also come to Kangar the same day. Both were in white khadi clothes and were wearing Gandhi topi. The Syangan Jagirdar, Kishan Singh, attacked them with lathi which broke the head of Surja Ram and one hand of Ganpat Ram. They fell on the ground. Kishan Singh was shouting "kill them". This attack led the revolutionaries to start demonstration against the Jagirdars, shouting slogans for freedom. This was the first demonstration against Jagirdars under leadership of Hari Ram Dhaka at Kangar village. On 30 October 1946 at 10 am, Hari Ram Dhaka along with his associates were arrested and imprisoned in the fort. They were beating them very badly and putting them in a shade full of pala. Muknaram Achra from village Gorisar, Chaudhari Ganpat Ram Satra from tehsil Churu and Hari Ram Dhaka along with others were put in pala after they fainted out of severe beating. At about 4 am in the morning they heard voices that thousands of Jats had gathered at village Barjangsar and started attacking Jagirdars and that they were reaching Kangar also. This sent ripples of pain amongst the Jagirdars who decided to release the freedom fighters. The revolutionaries were brought before Gop Singh, who was ADC of Bikaner Maharaja. The village Kangar was in Jagir of Gop Singh. Most of the Jagirdars had left the fort on hearing the news of coming of group of revolutionaries. The Kaimkhani of Ratangarh also left the fort of Kangar. The only persons left in the fort were Gop Singh himself along with Ram Singh DSP and his police party. All the revolutionaries had decided not to accept the directions of Gop Singh. At last they put the revolutionaries in a Jeep like cattle and through them away at Ratangarh. Here when they came to senses they found that a group of revolutionaries including Master Deep Chand, Moji Ram Chaudhari Chandgothi, Hans Raj Arya, Bhadra, Gangadatta and Prof Kedar from Ganganagar came to them. They were apprised of the incidence of Kangar.

Back to The Freedom Fighters/Freedom fighters from Churu district