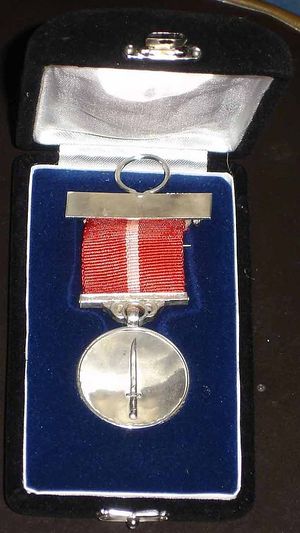 Sena Medal is awarded to members of the Indian army, of all ranks, "for such individual acts of exceptional devotion to duty or courage as have special significance for the Army." Awards may be made posthumously and a bar is authorized for subsequent awards of the Sena Medal.

It is awarded for gallantry. However, the Sena Medal (Distinguished) is given for distinguished service carried out by any soldier, not in the face of the enemy. The Sena Medal also serves as a sort of general commendation medal for the Indian Army. From 1 February 1999, the central government set a monthly stipend of Rs. 250 for recipients of the award when it is awarded for bravery. It has since been revised to Rs. 1000. It is preceded by the Vir Chakra, Shaurya Chakra & Yudh Seva Medal. It in turn precedes the Vishisht Seva Medal.

Here is partial list of Jat Recipient of Sena Medal . You may add more.

Back to Lists of Jatland