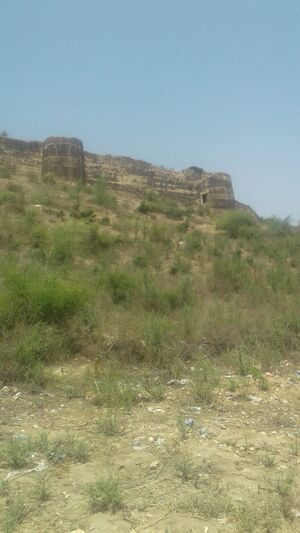 Nagavanshi Raja Sahajpal after becoming angry (Chhoh in Hindi) left and came to Pichhor and ruled here. After Chhoh they were known as Chhonkar. They worship tree called Chhonkara (Prosopis cineraria), also known as Sami or Khejri. [8]

History of the Jats, End of Page-75

1100 Vikram Samvat. Among the ancestors of Dholpur dynasty there was a king named Palansis Rao who was killed in Kanauj on the occasion of Sanyogita's Swayamwara (the self-selection of the groom by the girl). King Vijayapal who declared her his dharam sister gave his grandson Brahmadev and his mother queens Ghandra Kaumudi. When Shahabuddin Mohammad Ghori drove them out after killing the ruler. King Vijayapal had to face the invasion of Mohammad Ghori. He also had to fight against Abubakar Kandhari, Dharampal, and grandson of King. Sohan Pal founded the dynasty of Bichor. Their descendants are found both among the Jats and Rajputs. According to Colonel Todd, Chonkars, inspite of being Jats, are called Rajputs. in Mugal period some chhonkar jats accepted islam after shudhi andolan they joined chhonkar jadaun caste.they are now calling rajput chhodkar but original rajput donot marry them

Madanpal had a son called Subaipal, who drove out Kriah Raja of Digh and established his rule there. The Chonkar gotra is found in Western and Eastern Punjab. There are ten villages belonging to the Chonkars in Aligarh district, two in Jullundur district and one in Ambala district.

Ram Swarup Joon[11] writes about Chhonkar and Sansanwal: This is the gotra of the Bharatpur ruling dynasty. Their original gotra is Yadu. As they settled down in a village called Sansani, they became known as Sansanwal. They raised their voice against the atrocities of Aurangzeb, protected the Hindu Dharma and established a new capital. One Yaduvanshi ancestor belonging to this gotra, named Brij Raj ruled over the territory called Brij after his name. These people had returned home from Dwarka and their capital was Mathura, in the 64th generation of King Brij Raj.

Ram Sarup Joon[12] writes that...about 70 Jat Gotras joined the Gujar force and started calling themselves Gujars. Chhonker is one of them.

Chokar (चोकर), Chhokar (छोकर) is also a Gujar tribe, found in Karnal, where they have long been settled. Immigrating from beyond Muttra they once held a chaubisi, or group of 24 villages, with Namaunda as their head-quarters. [14]