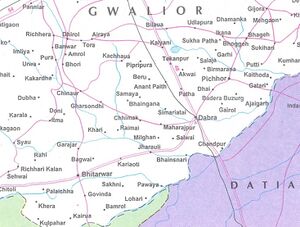 Location of Pawaya near border of Datia in Gwalior District

Pavaya (पवाया) or Pawaya village is an ancient historical village in tahsil Bhitarwar of Gwalior district in Madhya Pradesh. Its ancient name was Padmavati (पद्मावती). Pawaya is a Gotra of the Anjana Jats in Gujarat.

There is a small village named Karavati, situated on the Dabra (Distt-Gwalior) Shivpuri road. At a distance of 10 K.M. to the south-east of this village at the junction of rivers Sindh River and Parvati River (Sindhu and Para) the ancient grand City of Padmavati [1] was situated. Now-a-days this place is known as Pavaya or Padam Pavāya.[2]

Padmavati was an ancient city mentioned in several classic Sanskrit texts, Malatimadhavam of Bhavabhuti[3], Harshacharita of Bana,[4] and Sarasvatīkaṇṭhabharaṇa of Raja Bhoja. Bhavabhuti describes the city with tall mansions and temples with shikharas and gates, located between Para and the Sindhu rivers.

Mention in Inscription: Padmavati is also mentioned in inscriptions like the Kokkala Grahapati inscription of Khajuraho.[5] Verses 5-7: Praise of the Padmavati city. The inscription mentions that the city had rows of tall mansions. The dust used to arise because of running of strong horses.[6] It was found somewhere in Khajuraho or its vicinity, and is currently located in the Vishvanath temple there.[7] Cunningham had identified the Beejamandal temple at Jatkara village near Khajuraho as the Vishvanath temple.[8]

Padmavati is an obscure principality in Central India of that name in ancient India, known for having been overrun in the 4th century AD by Samudragupta of the Gupta empire. Now-a-days this place is known as Pavaya or Padam Pavāya.

Identification: Cunningham identified Padmavati with present Narwar (Shivpuri) near Gwalior.[9] M B Garde carried out excavations at Pawaya in 1924-25, 1933–34 and 1941. He identifies Pawaya with ancient Padmavati rejecting Cunningham’s identification with Narwar.[10][11]

Coins of Naga Rulers: Coins of several Naga kings, who have been dated between 210-340 AD, have been found at Pawaya. It is very interesting to note that during the rainy season, a very large number of coins belonging to the Naga rulers appear at the surface.[12] These coins have made the historians enable to identify this ancient Naga city. The first mention of this city as Padmavati, is made in the Vishnupurana [13], where it is stated that the Nava-Nagas made, Padmavati, Kantipuri and Mathura their capitals and ruled for seven generations. [14][15]

Among the antiquities found at Pawaya is an image of Yaksha Manibhadra.[16] It has an inscription that mentions that it was installed in the fourth regnal year of King Sivanandi and was worshipped by the gosthas or merchants.

Horace Hayman Wilson[18] explains that ....The nine Nagas might be thought to mean the same as the descendants of Shesha Naga, but the Váyu has another series here, analogous to that of the text: 'The nine Náka kings will possess the city Champávatí, and the seven Nagas (?) the pleasant city Mathura. Princes of the Gupta race will possess all these countries, the banks of the Ganges to Prayaga and Saketa and Magadha.' p. 480 This account is the most explicit, and probably most accurate, of all. The Nákas were Rájás of Bhágalpur; the Nágas, of Mathura; and the intermediate countries along the Ganges were governed by the Guptas. The Bhagavata seems to have taken great liberties with the account, as it makes Viśwasphúrtti king over Anugangá, the course of the Ganges from Haridwar, according to the commentator, to Prayaga, residing at Padmávatí: omitting the Nágas altogether, and converting 'gupta' into an epithet of 'medini,' the preserved or protected earth. Wilford considers the Nágas, Nákas, and Guptas to be all the same: he says, 'Then came a dynasty of nine kings, called the nine Nagas or Nágas; these were an obscure tribe, called for that reason Guptavanśas, who ruled in Padmávati. That city he calls Patna; but in the Málati and Mádhava, Padmávatí lies amongst the Vindhya hills. Kántipuri he makes Cotwal, near Gwalior. The reading of the Váyu, Champavati, however, obviates the necessity of all vague conjecture. According to Wilford there is a powerful tribe still called Nákas between the Jamuna and the Betwa.

Harsha Charita of Bana[19] tells....Of disasters due to mistaken carelessness frequent reports come daily to your majesty's hearing. In Padmavati there was the fall of Yagasena, heir to the Naga house, whose policy was published by a sharika bird.

The Naga Rulers of Padmavati

There were many potteries and coins of the 'Naga' kings, ancient temples and monuments discovered during excavations in the village.

During 3-4th centuries AD Nagas became powerful in Central India. The Nagas had their main centres at Kantipuri (modern Kutwar, Morena district), Padmavati (Pawaya, near Gwalior) and Vidisa. The coins of the Nagas have been discovered in thousands from these places and preserved at Gwalior Museum.[21]

Dilip Kumar Ganguly[22] writes that ....The Nagas established their rule at Vidisha, Padmavati (modern Padam Pawaya, Mathura and Kantipura, which has been identified by KP Jayaswal as Kantit between Mirzapur and Vindhyachal, but located more properly at Kutwal or Kutwar in Morena district Madhya Pradesh.

The existence of several Naga principalities, as alluded in Puranas, is strikingly attested by Samudragupta's Allahabad pillar Inscription which mentions Nagadatta, Nagasena, Ganapatinaga, and Nandi, all Naga princes among the kings of Aryavarta slain by Samudragupta. Several Naga coins have been discovered from places like Kutwar (Morena), Narwar (Shivpuri) and Padam Pawaya (Gwalior) in Madhya Pradesh and Mathura in Uttar Pradesh. Padam Pawaya has yielded the largest number of such coins, including those of Bhimanaga, Devanaga, Brihaspatinaga, Ganapatinaga, Skandanaga, Vasunaga, Vyaghranaga, Prabhakarnaga, Bhavanaga, Ravinaga, Vibhunaga and Vrishabha.

Dr Naval Viyogi[23] writes that ....The Nagas had, under the evident pressure of the Kushanas left Padmavati. We have the definite statement in the Puranas that Vinvasphani ruled at Padmavati and ruled upto Magadha. [24] Therefore, we may take it that about 80-100 AD the Naga dynasty takes shelter, away from the trunk road between Mathura and Vidisa, into the inner jungles of the central provinces. [25]

The Bharsivas, re-issuing from the jungles of Hoshangabad and Jabalpur seem to have reached the Ganges through Baghelkhand. They established their capital at Kanti or Kantipuri. [26] Now it is a large mud fort about a mile long on the Ganges. The fort was destroyed in the muslim period and the king's seat was removed into the neigbouring hills at Vijaypur and at Manda, where the family, now in two branches: resides. The local tradition at Kanti is that long before 'the Gahadwala' the fort belonged originally to the Bhar Kings. The 'Bhar' kings here are evidently a corruption of the 'Bharsiva' kings [27] or Bharshiva.

Dr Naval Viyogi[28] writes that ....The Bharsivas, in the later days of imperial Kushanas or about 150 A.D. reached Kantipuri on the Ganges, they performed there Ashwamedha and coronations at or near Banaras where is located the place known as Nagwa, the present site of the Hindu University seems to be associated with their name. From Kantipuri, they moved westwards under Virasena, who strikes coins extensively and whose coins are found from Ahichchhatra, regains Padmavati and Mathura.

It is stated in the Vayu and Brahmand Puranas that rule of Navanaga was not only confined to Samayukta Prant alone but also to the east and the western Bihar also because their capital was in Mathura as well as in Champavati-Bhagalpur. [29]

Sometimes before Samudragupta, (335-375 AD) the Naga kings were ruling over Eran. As,[32] Padmavati, Kantipuri and Mathura were three centres of their rule, the Eran- Vidisa was fourth. Naga coins have been recovered in a very large number from this region. All these four kingdoms were inter-related with each other and perhaps, they all unitedly encountered the attacks of Kushanas and Scythians and pushed them back from their motherland.

Chandragupta died in 335 AD and was succeeded by his son Samudragupta, a tireless conqueror. He took the kingdoms of Shichchhatra and Padmavati early in his reign. He then took the Kingdom of Kota and attacked the tribes in Malavas, the Yaudheyas, the Arjunayanas, the Madras and the Abhiras. By his death in 380, he had incorporated over twenty kingdoms into his realm, his rule extended from the Himalayas to the river Narmada and from the Brahmaputra to the Yamuna. He gave himself the titles King of Kings and World Monarch. He performed Ashwamedha yajna (horse sacrifice) to underline the importance of his conquest.

According to historian Ram Sarup Joon, The facts are, however, different. This dynasty belonged to Madrak Jat gotra of Yadav Vansh and was devotees of Shiva. They had a number of ruling dynasties such as Takshak Nag, Bachak Nag, Kilkil Nag, Karkotaka, Kaliramna etc all of which are Jat gotras. Mathura, Padmavati and Kantipur were capitals of Naga dynasty. Nagas of Padmavati were called Taank, which is also a Jat gotra, and are found in 24 villages near Sonipat.[33]

The Naga dynasty had its hold in the present Gwalior - Bhopal divisions of Madhya Pradesh from about beginning of third to the middle of fourth century AD. Their centres were at Padmavati (Pawaiya near Gwalior) and Kantipuri (Kutwār district Morena ). Several thousand copper coins have been discovered at these sites and other sites. The successors of Satvahanas in the Tripuri region were Bodhis. Names of five Bodhi rulers are known from the recent excavations at Tripuri. [34] Eran can be called to be the oldest historical town of Sagar district in Madhya Pradesh. In earlier coins and inscriptions its name appears as Airikiṇa. From an early inscription at Sanchi we know that the residents of Eran had made some gifts to the famous Stupa situated there. The word erakā probably refers to a kind of grass which grows at Eran in abundance. [35]

The Bharsiva Naga Royal family of Padmavati: A Taka family

Dr Naval Viyogi[36] writes that .... The description of this name (Taka) is found in Bhavasataka.[37] which is dedicated to Ganpati Naga. We have come to know, the history of the family of Ganpati, from the copy of such a manuscript of Mithila, which was composed during the ruling period of Ganpati Naga and was dedicated to him. The poet writes, "The Naga king possesses both Vāk (learning) and Padamalaya (Padmavati)." In poem his name is said to be Gajavaktrasri Nag (The Naga king with the face of an elephant). In another poem he says- "That all the Naga kings on seeing Ganpati king are terrified." (Jayaswal, The catalogue of Mithila MSS Part-Il P-105).

In the Eastern[38] Panjab there was the feudatory dynasty of Singhpur[39] who were the 'Kings' of Jalandhara. This receives corroboration from the history of the migration of Yadavas from Mathura as recorded in the Sabha Parvan Chapter-XIV Verse 25 FP. The Salvas and Kunindas had migrated along with and at the same time as the Yadavas from Mathura (Surasena) and its neighbourhood and settled in Panjab.

The Takas who later migrated to Malava from the Salva country, the Singhapura Yadavas and the Mathura Yadava-Nagas thus seem to have all belonged to the great Yadava stock, which explains their special patriotism for Mathura. The Singhpur family was thus a family allied to the Bharsiva.[40]

It is obvious that Taka family was a part of great Yadava race.

These Yadavas were round-headed Alpine Iranian race in origin. Bharshiva of Padmavati was also related to Taka family of Panjab.