They are mentioned in the Mahabharata along with the Chhinas, Odhrans, Hara Hunas, etc. as Varshneya a people [12] Satapatha Brahmana mentioned them as Varsna .

Bhim Singh Dahiya[13] writes: They are also mentioned as Varisha. Sabha Parva mentions a sea near the country of Varisha. We have taken Varaish and Varaich as one clan, though Tribes and Castes mentions them separately. Atharva Veda mentions them as a people and Chhandogya Upanished says that a place called Raikkaparna is situated in the land of Mahavrishas. Jaiminiya Upanishad Brahmana mention a king Hritsavashya, a king of the Mahavrishas. Rig Veda mentions a king Daivata, of Sarangya clan who was victorious over the Varichirichi (Vantas).

Dilip Singh Ahlawat has also mentioned it as one of the ruling Jat clans in Central Asia.[14]

Kunjah: As per Hari Ram Gupta [15] and British Gujarat (Punjab district) Gazetteer - 168 (1892-93), this town now located in Pakistan is, 12 kilometers from Gujarat, on the road to Phalia. It was founded by a person called Jethu Varaich. It is likely that the word "Jethu" probably is "Jathu" or Jat, "Varaich" is a common current Jat clan name [16].[17]

Rahmat Khan was a Varaich clan Jat who captured Gujrat Fort in Pakistan.[18]

H. W. Bellew [19] writes that The Baloch were originally the Rajput Balaecha and occupied the Kharan country adjoining their fellow tribesmen the Rajput Bharaecha (now represented in Afghanistan by the Bahrechi of Shorawak), both being clans of the great Chahuman, or Chohan, Agnikula. The latter have established some important and extensive colonies in India, and have given their name to a district (Bahraech) in Oudh; the Nuwwabship of Jhajjar (Delhi district) was another colony of this tribe, the late chief of which, a Bahraechi Pathan, was executed for his treachery in the Indian Mutiny of 1857. We shall speak of the Baloch later on, but must here notice such of their nationality as are now found within the area above assigned to the Dadikai, First, however, it will be convenient to dispose of the Bahrechi in Shorawak of Afghanistan.

H A Rose[20] gives a detailed account of this clan as under: Bharais (भराईस) — The Bharāis who are scattered throughout these Provinces are also known as Pirhain,† a name which is explained thus: —

(i) One Bukan Jat was a devotee of Sakhi Sarwar who one day said to him tujhe piri di, 'the saint's mouth has fallen on thee', whence the name Pirhai.

(ii) Another account says that after leaving Dhaunkal, Sakhi Sayyid Ahmad went to Multan and rested for a while at Parahin, a place south of Shahkot, which was the home of his mother's ancestors, Rihan Jats by caste. At Multan an Afghan chief had a daughter to whose hand many of the Shahkot youths aspired, but none were deemed

† The form Pirhain is said to be in use in Saharanpur. The word pariah is also said to mean drummer and is possibly connected with Bharai - Crooke : Things Indian

[Page-85]: worthy. One day, however, the Afghan invited Sayyid Ahmad to a feast and begged him to accept his daughter in marriage. This offer the saint accepted, and the sihra below, which was composed on this occasion, is still sung with great reverence. The mirasi, however, neglected to attend the wedding punctually, and when he did appear, rejected the saint's present of a piece of blue cloth, 1-1/4 yards in length, at the instigation of the Jats and Pathans, saying it was of no use to him. Hearing this the , Sayyid gave it to Shaikh Buddha, a Jat who had been brought up with him, saying : "This is a bindi (badge), tie it round your head, and beat a drum. We need no mirasi, and when yon are in any difficulty remember me in these words : — Daimji Rabdia sawāria, bohar Kali Kakki-wādlia — Help me in time of trouble, thou owner of Kali Kakki ! You and your descendants have come under our protection, panāh, and you shall be called pāndhi." This term became corrupted into Parahin in time. Thus the account contradicts itself, as the name is said to be derived from Parahin, a place.

The term Bharai itself is usually derived from chauhi bharnā, lit. 'to keep a vigil,' in which are sung praises of the Sakhi. But another and less simple account says that owing to his marriage Sayyid Ahmad incurred the enmity of the Jats and Pathans of Shahkot and left that place for Afghanistan, accompanied by Bibi Bai, Rānā Mian, and his younger brother. Twenty-five miles from Dera Ghazi Khan they halted. No water was to be found, so the Sayyid mounted his mare Kali Kakki and at every step she took water came up. His pursuers, however, were close at hand, and when they overtook him the Sakhi was slain, and buried where he fell. The spot is known as Nigaha and still abounds in springs.

Years after Isa, a merchant of Bokhara, and a devotee of Sakhi Sarwar, was voyaging in the Indian Ocean when a storm arose. Isa invoked the saint's aid and saved the ship. On landing he journeyed to Multan where he learnt that the saint had been killed. On reaching Nigaha he found no traces of his tomb, but no fire could be kindled on the spot, and in the morning as they loaded the camels their legs broke. Sakhi Sarwar descended from the hill on his mare, holding a spear in his hand, and warned the merchant that he had desecrated his tomb and must rebuild it at a cost of 1-1/4 lakhs. He was then to bring a blind man, a leper, and an eunuch* from Bokhara and entrust its supervision to them. One day when the blind man stumbled near the tomb he saved himself by clutching at some kahi grass where-upon his sight was restored and his descendants are still known as the Kahi. The eunuch was also cured and his descendants are called Shaikh. The leper too recovered, and his descendants, the Kalang, are still found in Nigaha. To commemorate their cures all three beat a drum, and Sakhi Sarwar appeared to them, saying ; "He who is my follower will ever beat the drum and remain barahi,† 'sound,' nor will he ever lack anything." Hence the pilgrims to Nigaha became known as Bharais.

* For eunuchs as attendants at shrines see Burton's Pilgrimage to Medina and Mecca Vol. I, p. 371.

[Page-86]: Strictly speaking the Bharais do not form a caste, but an occupational group or spiritual brotherhood which comprises men of many castes, Dogar, Habri, Rawat, Dum, Rajput, Mochi, Gujar, Tarkhan and last, but not least, Jat. They belong to the Muhammadan religion, but in marriage they follow the Hindu customs. Thus a Jat Bharai may only marry a Jat woman, and in Kangra, it is said, she too must be a Bharai. In Ambala, however, a Bharai may marry any Jatni, and in Kapurthala it is said that, being Muhammadans, marriage within the got is permitted, and that; Rajput Bharais may take wives from Jat Bharais. There appears indeed to be no absolute or even general rule, but the tendency apparently is for the Bharais recruited from any one caste to form a separate caste of Bharais, marrying only in that caste, e.g., in Ludhidna the Jat Bharai only marries a Bharai Jatni, and the gots avoided are the same as among the Jats. The Jat Bharais are numerous. They claim descent from one Garba Jat, a Hindu attendant at Sakhi Sarwar's shrine, who was in a dream bidden by the saint to embrace Islam. On conversion he was called Shaikh Garba. The Jat Bharais have several gots: — Dhillon, Deo, Rewal Garewal, Man, Randhawa, Jham, Karhi and Badecha. 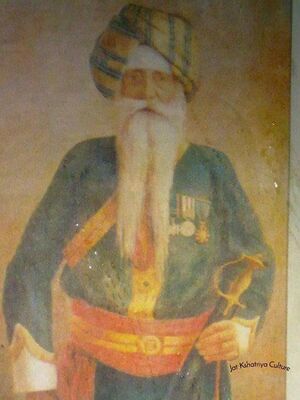 The first and most famous of all the Indian officers who served in Hodson's Horse. He was a very courageous and charismatic figure in the history of the regiment. Born in the Gujranwala district, the son of Waraich Jat Jagirdar Sardar Dava Singh of Ruriala (date of birth unknown). His first military experience was as a cavalry officer in the Sikh army fighting against the British in the 1st Sikh War 1845-6. In 1852 he entered service with the British as a mounted policeman in Neville Chamberlain's Punjab Police. In June 1857 Mr Montgomery asked him to raise the first Risalah for Hodson. He served throughout the Siege of Delhi and most of the battles fought by Hodson's Horse. He was badly wounded at the battle of Nawabganj after capturing guns and displaying great bravery. He was well decorated, including the Order of Merit 1st class and the Order of British India 1st class. On the 9th March 1866 he was appointed as the first Risaldar Major of the 9th Bengal Cavalry, a post he held until his retirement in 1877. Having left military service he was made Honorary Magistrate at Amritsar and then manager of the Darbar Sahib (Golden Temple) at Amritsar. This post had been held by his elder brother, Sardar Jodh Singh for 13 years. He retained that post until his death on 16th March 1892.

The picture shows him in later life, after his retirement, wearing his old 9th Bengal Lancers kurta, with gold belts and red kummerbund. His medals are partly obscured by his long grey beard, worn in the old style rather than rolled up. He wears spectacles and his white pag is worn low down on his forehead. His sword is an Indian tulwar rather than the army issue sword worn by younger officers. There is a large portrait of Man Singh hanging in the officer's mess of the present day 4th (Hodson's) Horse.

Waraich - The Waraich are said to be of Chauhan Rajput ancestry. They are found in Gujrat, Gujranwala, Sialkot, Lahore, Sargodha and Faisalabad districts. Prior to partition, they were also found in Amritsar, Gurdaspur and Jalandhar districts.

According to 1911 census the Waraich were the principal Muslim Jat clan in districts: