Ram Swarup Joon[11] writes about Rathi, Ruhal and Dhankharh: Rathi is a very old gotra. The Rathi gotra is found among Khatris and Marathas also. As they originated from Rashtra or Saurashtra, Rashtra Kot or Rathi they took their name from this region. According to historical evidence there was king named Saurashtra in the dynasty of Lord Krishna who ruled over this region and thus the region came to be called Saurashtra. Jats of the Rathi gotra are found in district Rohtak and near Bahadurgarh, Sochas, Rajlu and Rajpur. They have 16 villages in the Jamuna Khadar, 1 village in Rajasthan, 6 in district Meerut, 6 in district of Patiala, Amritsar, Bareilly and Rohtak.

Dhankar gotra is said to be started after Dhana-khanda province of Maharaja Moradhwaja (मोरध्वज). Mordhwaj was Chauhan ruler in Alwar region around 5th century AD, 34 generations prior to Prithvi Raj Chauhan. [12]

Bhim Singh Dahiya mentions that the seers of the Rigveda period are worth noticing. These are identifiable with the existing Jat clans, e.g. Lusaka Dhanaka, the seer of RV 10/35, 36 is apparently of the Dhankar clan; from Dhanaka, we have the derivative for descendants as Dhanaka as well as Dhanaka(r).

H.A. Rose[13] writes that Dhankar (धनकर), is a Jat tribe of the same stock as the Rathi. They are almost confined to Jhajjar tahsil in Rohtak, and are, perhaps, nothing more than a local clan of the Rathi tribe.

A variant of this Gotra is mentioned as Dinkar (दिनकर) by Thakur Deshraj [14] who live in Barkoli Village in Bharatpur district in Rajasthan. 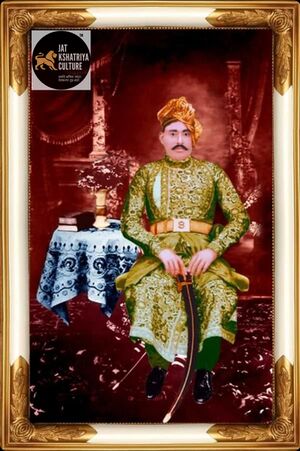 Largest group of Dhankhar's is at Jhajjar (Haryana) with a cluster of 12 villages.

Dhangar surname of Jats is found in village Nosva,

Dhankhar surname of Jats is found in village-

They are also found in Meerut and Bijnor districts of Uttar Pradesh.